This is the last Banned Books out of the series that myself,  Bibliobeth & Luna’s Little Library will be doing. Beth and I will continue to look at Banned Books in 2015!

For this feature we have looked at why the book was challenged, how/if things have changed since the book was originally published and what we actually think of the book!

This month’s pick was Lush by Natasha Friend. 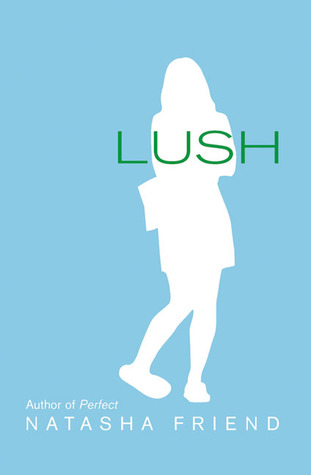 It’s hard to be a 13-year-old girl. But it’s even harder when your father’s a drunk. It adds an extra layer to everything — your family’s reactions to things, the people you’re willing to bring home, the way you see yourself and the world. For Samantha, it’s something that’s been going on for so long that she’s almost used to it. Only, you never get used to it. Especially when it starts to get worse…

BETH: This is such a recent publication (2007) that I’m actually really surprised that it is banned/challenged in schools. Out of all the books we have read so far, this is the one that I really don’t understand the reasons behind it and it confused me so much that I actually had to leaf through the book again to try and work out why there may be problems.

CHRISSI: This is one book that I totally DO NOT see why it was challenged. I’m actually quite annoyed by it being challenged, because I actually see this book as a book that could be used to support teenagers going through the very same thing. It is a story about alcoholism- so of course it’s going to contain reference to that. As for offensive language… pffft.

LUNA: You know I actually checked to see if there was another Lush by Natasha Friend because seriously are you kidding me? Do I understand any of the reasons – NO. The story is about a 13 year old girl dealing with her father’s alcoholism how can it not contain alcohol and its effects? The offensive language as far as I can figure out is the word “boobs”. I repeat, are you kidding me?!

BETH: As I said above, this is a recent release, and not much has changed in seven years, so definitely NO. By banning or challenging it, I think it could be depriving teenagers of a book that could be incredibly useful if they were in a similar situation. There was a sexual scene but I really don’t think it was particularly explicit (You probably get worse on Coronation Street or Eastenders for goodness sake!)

CHRISSI: No. It could be used as a support/understanding/educative book. Just no.

LUNA: Pfft. Don’t understand why it’s ever been challenged in the first place. I’ve said it so many times but here I go again: Don’t underestimate teenagers.

BETH: I think this is one of my favourite books out of our banned book series. It was a beautiful and emotional rollercoaster of a read as Sam and her family learn to deal with her father’s addiction. The characters were brilliantly realised, I loved our main character Sam and her little brother Luke is too adorable for words. For me, it felt like such an authentic read that I think teenagers in the same situation could relate to the circumstances that Sam finds herself in and benefit from it.

CHRISSI: This book is potentially my favourite out of our banned book series. It contains so many important topics and as I’ve said before, I think it could be incredibly educative/supportive. I was very moved by this story. I loved it!

LUNA: I am so impressed how much of a punch this relatively short book packs. Sam has a lot to contend with, her father has been drinking for a long time but her mother isn’t acknowledging it. Sam’s father is stressed, he needs support and understanding. Sam doesn’t agree and then it comes the night he goes too far.
Natasha Friend really deals with the emotions Sam goes through brilliantly, as the reader you’re with Sam from the very beginning. I loved the friendship she strikes up with AJK. Sam’s relationship with her little brother, how she looks after him. At times my heart just ached. Lush is a great book.

CHRISSI: Without a doubt!