Banner made by the lovely Luna’s Little Library- click on the image to get to her blog!

Welcome to this month’s banned books post! This month Beth and I read I Know Why The Caged Bird sings by Maya Angelou. 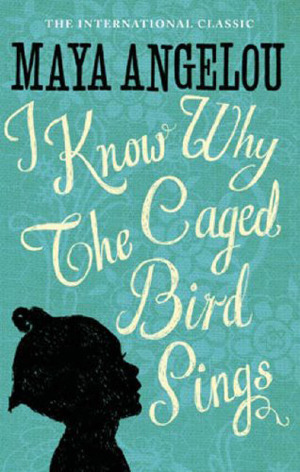 Sent by their mother to live with their devout, self-sufficient grandmother in a small Southern town, Maya and her brother, Bailey, endure the ache of abandonment and the prejudice of the local “powhitetrash.” At eight years old and back at her mother’s side in St. Louis, Maya is attacked by a man many times her age—and has to live with the consequences for a lifetime. Years later, in San Francisco, Maya learns that love for herself, the kindness of others, her own strong spirit, and the ideas of great authors (“I met and fell in love with William Shakespeare”) will allow her to be free instead of imprisoned.

Poetic and powerful, I Know Why the Caged Bird Sings will touch hearts and change minds for as long as people read.

BETH: This is one of the “older” novels on the Frequently Challenged Books of the 21st Century (see source above) but I don’t believe that it was consistently sexually explicit for the time period. There is only one incident where the book was slightly explicit where Mr Freeman rapes Maya. I first read this book as a teenager and do remember feeling a bit shocked when the author describes the incident but I think the way it was written was utterly compelling and it made me want to read on.

CHRISSI: I can see why some people would have problems with using it with younger readers, but I think compared to some literature out there based around the same period it’s not as sexually explicit as some reads are. Yet, I can understand the particular scene which would be quite hard to read if we’re thinking about using this book in a school setting. It’s particularly shocking. The life lessons that are in this book are important, but incredibly heavy going.

BETH: Reading this book again as an adult was a real treat and I found that my opinions and emotions around Maya’s rape haven’t changed. As to whether it should be a “challenged” book in today’s world, I really don’t think so. I would have loved to study this while at school as I think it brings up a lot of important issues. My only hesitation would be to aim the book at a slightly higher age level i.e. GCSE.

CHRISSI: Hmm. As I mentioned before, the life lessons are important, but the content itself is quite heavy going and shocking. I don’t think it should be banned, but it should be used with 15 year olds + . I don’t know. Am I underestimating younger readers?

BETH: I loved this book when I first read it and I still love it today. The author writes so beautifully about her childhood and the barriers she had to overcome in the American South, where racial prejudice and segregation was simply a way of life. She comes out of everything she goes through stronger and more determined with a zest for life that is truly inspirational.

CHRISSI: I didn’t like it as much as I had hoped I would. I thought it dealt with some incredibly powerful issues, but for some reason it fell short for me. Perhaps its because non fiction really isn’t my sort of thing. There’s no denying that Maya Angelou is a talented writer though.

Next month we read Crank by Ellen Hopkins!