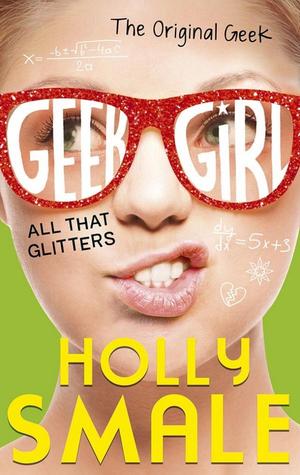 How did I get it?:
Netgalley- thanks to Harper Collins UK

The fourth book in the award-winning GEEK GIRL series. Harriet Manners has high hopes for the new school year: she’s a Sixth Former now, and things are going to be different. But with Nat busy falling in love at college and Toby preoccupied with a Top Secret project, Harriet soon discovers that’s not necessarily a good thing…

I swear this book is getting better and better as the series progresses. Don’t get me wrong, it was a strong series right from the first book, but as Harriet’s story progresses it’s clear that Holly Smale is a fantastic writer. Her writing is just so easy to read. It’s fun and engrossing. In Harriet, Holly has created a lovable character. She has her flaws but she’s incredibly real and so easy for the younger readers (and those not AS young) to find common ground with.

Don’t expect All That Glitters to be a happy, sparkly book all the way through. There are fun moments and laugh out loud sentences, but it’s also incredibly emotional. Harriet deals with a range of experiences including sudden popularity (something she definitely isn’t used to), more modelling and heartache. It is the heartache that really got to me. Holly writes about it in such a raw manner, with words that completely tore at my heartstrings. I wanted to get inside the book and give Harriet a massive hug.

That’s as far as I think I can go with this review, because one thing I know is that I don’t want to spoil it for those who haven’t read it. All That Glitters is best read with no knowledge of what’s going to happen. It really made an impact on me. I truly believe that this book is the best in the series so far, purely because of the emotional depth!

This series gets stronger and stronger with every book!