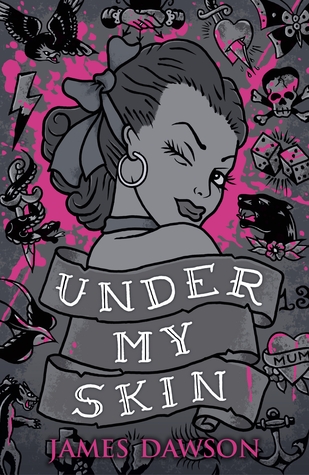 How did I get it?:
I received it from Hot Key Books, in exchange for a honest review!

Meet Molly Sue. Once she’s under your skin there’s no getting rid of her…

Seventeen-year-old Sally Feather is not exactly a rebel. Her super-conservative parents and her treatment at the hands of high school bullies means that Sally’s about as shy and retiring as they come – but all that’s about to change. Accidentally ending up in the seedier side of town one day, Sally finds herself mysteriously lured to an almost-hidden tattoo parlour – and once inside, Sally is quickly seduced by its charming owner, Rosita, and her talk of how having a secret tattoo can be as empowering as it is thrilling. Almost before she knows what she is doing, Sally selects sexy pin-up Molly Sue, and has her tattooed on her back – hoping that Molly Sue will inspire her to be as confident and popular as she is in her dreams.

But things quickly take a nightmareish turn. Almost immediately, Sally begins to hear voices in her head – or rather, one voice in particular: Molly Sue’s. And she has no interest in staying quiet and being a good girl – in fact, she’s mighty delighted to have a body to take charge of again. Sally slowly realises that she is unable to control Molly Sue… and before long she’s going to find out the hard way what it truly means to have somebody ‘under your skin’.

I’ve made no secret of the fact that I adore James Dawson’s writing. I ADORE IT. He’s seriously become an author that I immediately want to read as soon as I hear about a new book of his. I often don’t even need to read the synopsis. I know I’ll want to read it, so when I had the opportunity to read Under My Skin, I had to jump at the chance. If you’re not into scary reads, then don’t worry, Under My Skin isn’t as scary as Say Her Name (that book still terrifies me, months on from reading it. Thanks James!) Under My Skin is an intriguing, utterly addictive read. I devoured it!

Sally Feather is a shy character who I believe many readers will identify with in one way or another. She’s incredibly relatable. One day, Sally is drawn into the House of Skin tattoo parlor. She’s particularly enamoured by the tattoo of a pin up Molly Sue. Molly Sue is dangerous though. She’s beautiful but dark and dangerous as the same time. Molly Sue was such an interesting character. She takes over Sally’s mind (and body) with her dark thoughts which leads Sally into all sorts of trouble- which I won’t explore…I’ll let the reader discover the sticky situations themselves.

James writes so well, it’s easy to devour his writing even though horror is a genre I generally stay away from. I just can’t stop myself when it comes to this author, even if I am freaked out months after reading his books! His stories are exciting, engrossing and hard to put down. I can’t wait to read whatever he writes next. I just know it’ll be awesome.

Addictive, dark read. The Queen of Teen does it again!

4 thoughts on “Under My Skin”