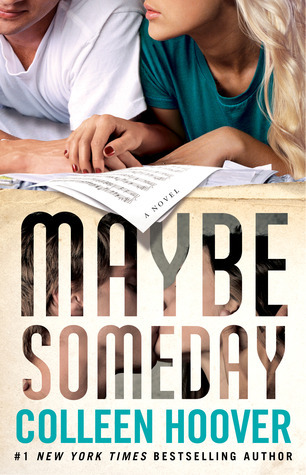 At twenty-two years old, Sydney is enjoying a great life: She’s in college, working a steady job, in love with her wonderful boyfriend, Hunter, and rooming with her best friend, Tori. But everything changes when she discovers that Hunter is cheating on her—and she’s forced to decide what her next move should be.

Soon, Sydney finds herself captivated by her mysterious and attractive neighbor, Ridge. She can’t take her eyes off him or stop listening to the passionate way he plays his guitar every evening out on his balcony. And there’s something about Sydney that Ridge can’t ignore, either. They soon find themselves needing each other in more ways than one.

A passionate tale of friendship, betrayal, and romance, Maybe Someday will immerse readers in Sydney’s tumultuous world from the very first page.

I have had a copy of this book for so long now, but for some reason I had been putting off reading it, despite me hearing amazing things about it from book blogging friends. I put it on my to be read list for Spring and because I’m trying to get through the books I do have… I decided it was time to whip Maybe Someday out and finally get around to reading it. I don’t know why I waited for so long. Maybe Someday didn’t take me long to devour. I was immediately swept up in the story. Colleen Hoover creates characters that I really care about.

Maybe Someday follows Sydney who  finds out her boyfriend is cheating on her with her best friend. Sydney was having doubts about her relationship, but doesn’t expect to be betrayed by people she cares about. Sydney is in college, and often studies outside on the balcony. She enjoys listening to the guy across the road who plays guitar. Sydney finds herself writing and singing lyrics to the music he creates. He notices though, and asks her for help with his writer’s block. They begin to form a friendship with their bond through music, their friendship becomes much deeper through their exploration of song writing together. However, he is taken. They can’t deny their feelings for each other, but for many reasons don’t want to hurt anyone in the process.

I’m not a fan of reading about cheating in any shape or form, so I’m not sure why this book worked so well for me. Perhaps it’s because I utterly believed in the characters. Part of me just wanted them to be together, but not hurt anyone in the process. I wanted him to break up with his girlfriend despite the problems he had in doing so (I won’t spoil why he feels he can never break up with her!) I’m not a big fan of stories with love triangles in. I often find them uninspired and a little boring, but the way Colleen Hoover approached relationships in Maybe Someday was powerful and emotional. I understood the struggle the characters were going through. However, it was the element of cheating that prevented me from giving this book five stars.

The characters are easy to like. I love that there were a diverse range of characters (and that’s all I’ll say on that). It’s nice to see a good representation of different people.

I’m not a massive fan of the New Adult genre, but Colleen Hoover is one of my favourites in the genre. I find that she doesn’t focus on sex as many authors do with New Adult, but she really focuses on the romance and the rollercoaster of emotions that go with it. It makes her books a pleasure to read. They’re deeper than you’d expect.

This book comes with a soundtrack with all of the songs that the characters write. If you’re into listening to music, then it’s a fantastic supplement to a brilliant story.

An engrossing read. Colleen Hoover completely wrapped me up in this story!