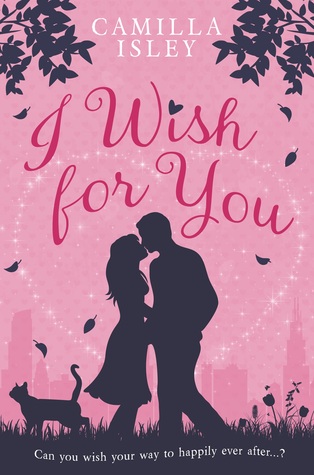 How did I get it?:
I was sent a copy by Camilla Isley, in exchange for an honest review (which does not affect my opinion of the book!) Thanks to Camilla!

A year ago when the love of her life dumped her for no apparent reason, Ally thought she had hit rock bottom. But now that she has seen him with another woman, and one she knows only too well, her life seems to have reached a whole new level of low.

Yet, when she stumbles across an ancient object infused with magical powers and a stranger with a dark past appears out of nowhere promising to grant all her wishes, she finds herself hoping again.
Suddenly Ally’s life is turned upside down; she has a mystery to solve, a rival to beat, a millenarian curse to break, and well, she wants to have some fun playing with her new “gifts”…

But can she wish her way to happily ever after?

I Wish For You is one of those books with a cover which completely sums up what it is about. The cover screams romance to me. Certainly, chick lit used to be my favourite genre to read, and it still has a place in my reading life! I just read more widely now than I used to. I do like to dip my toes into chick lit every now and again, and when I was approached to read and review a copy of I Wish For You, I decided to snap up a copy. These kind of books are brilliant for when I want a lighter read and I Wish For You certainly fit that mould.

I Wish For You is Camilla Isley’s debut novel. It tells the story of Ally, who is still pining after her ex boyfriend James. It has been a year since they broke up, but Ally is still hopeful that they’d get back together one day. One day Ally is shopping with her mum at a flea market. Ally comes across a little box. A woman tries to give Ally the box, but Ally refuses. She is surprised to find it in her handbag later. Ally notices a dial which she turns and ends up releasing a genie who offers to grant her wishes. The genie is called Arthur and is not used to living life in the 21st Century. Ally and Arthur’s journey is interesting as Ally chooses her wishes and Arthur adapts to a very different way of living.

I Wish For You is such a fairy tale-esque story, so with my love of fairy tales, you can see why I really enjoyed reading it. I did think it was a little predictable in places and I wouldn’t say it’s a story that completely stands out in the genre, but it’s still a completely engrossing story and it certainly didn’t take long to read.

Ally is a good character, she means well but at the same time she’ll do anything to get James back. She was quite brutal in the way she wanted to ruin James’ new girlfriend. Ally is likeable, but I felt sorry for her. She was totally living in the past and was unable to move on. This will be relatable to so many people. I thought Arthur was an adorable character, he was certainly a favourite of mine.

I think Camilla Isley has a promising future in this genre. I Wish For You was a good debut, and I’d definitely read more from her!

I Wish For You is light and fun. Worth reading for fans of the genre!

4 thoughts on “I Wish For You”