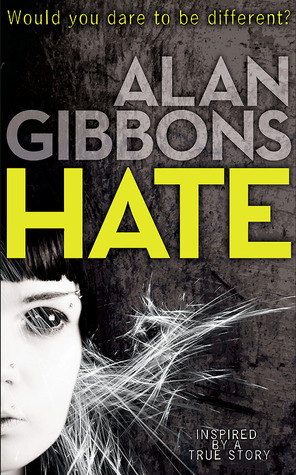 Eve’s older sister, Rosie, was bright and alive and always loved being the centre of attention. Then one day, she is brutally murdered. Six months later, Eve meets Antony and discovers that he was there the night Rosie died and did nothing to help. Is there any way she can ever get past that? Inspired by the Sophie Lancaster murder in 2007, which saw Sophie and her partner Rob viciously attacked in Stubbylee Park, Bacup, Lancashire because of the way they dressed. This is a hard-hitting real-life thriller about friendship, courage, loss, forgiveness and about our society and communities.

This book by Alan Gibbons is a work of fiction, but it was inspired by Sophie Lancaster’s murder in 2007. Sophie and her boyfriend were attacked by strangers because of the way they dressed. Alan’s story, Hate, explores a similar situation and focuses on the lives of those left behind and how acts of hate can affect so many people.

Hate focuses on Eve, the sister of Rosie, the girl that was murdered; Anthony, who is a witness to the attack and Oli who is Eve’s best friend’s brother. Oli is gay and begins to experience some hate towards hom as he comes out. Hate follows the characters trying to get their lives back on track. Eve’s life has changed quite drastically. Her parents have separated, her mum is still fighting for justice for her daughter and Anthony has started to attend Eve’s school. Eve is devastated as she believes Anthony was cowardly and should have supported Rosie when she was being attacked. Anthony is also struggling since the attack. He is feeling guilty for not doing anything to help, but he was paralysed by fear due to issues in the past. Oli faces prejudice after coming out to this parents and the rest of his school. All of the points of view come together and the characters all link together in a way that I won’t spoil.

What I think is so important about this book is that it gives a really important message about hate crime. You would hope that we are getting better in society, but unfortunately hate crimes and not accepting others for their differences is still not as unheard of as we’d hope. This book really does explore some gritty and hard hitting issues, but it deals with them in such a readable and thought provoking way. The chapters are short and snappy. It certainly made me think about it, days after I had read it.