Welcome to this month’s Banned Books feature. This month we read Forever by Judy Blume. 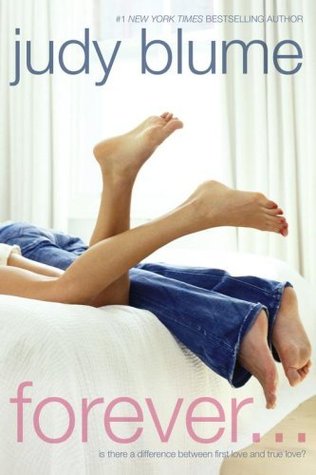 Katherine and Michael meet at a New Year’s Eve party. They’re attracted to each other, they grow to love each other. And once they’ve decided their love is forever, they make love.

It’s the beginning of an intense and exclusive relationship, with a future all planned. Until Katherine’s parents insist that she and Michael put their love to the test with a summer apart…

In the Top Ten most frequently challenged books in 2005 (source)

BETH: I am finding this really tricky! The reason is that Judy Blume is one of my book goddesses and her books helped me so much in childhood and adolescence. Okay, so this book was first published in the seventies and it is quite sexually explicit. Okay, VERY sexually explicit. I was part of the generation in the 1990’s that passed round a copy of this book under our desks in the classroom and hid it from the parents. Back in the seventies I can understand why this book was challenged. I can’t remember if there was ever a book before then that tackled sex in such an honest, no holds barred way and so was bound to raise a few eyebrows.

CHRISSI: I can understand why it was banned, especially for young adults back in the seventies. I personally never read it when it was hugely popular in the 90s. I remember my mum telling me I wasn’t ‘allowed’ to read it. For some reason, I didn’t go against her wishes. Such a good girl. I was always intrigued about the content, so I was pleased that it was picked for our banned books feature.

BETH: If we are talking about school settings I really can’t see this book being taught in a classroom except by a very progressive teacher and even then, I still think there would be complaints. If we’re talking about the book being stocked in the school library then yes, I personally think it should. As I mentioned above, it shows sex in a real way and I think Katherine is a terrific role model for not rushing into anything and making sure she was certain herself before she started having a sexual relationship with Michael. I think teenagers would relate to it and it gives honest information that may satisfy curiosity and stop young adults from jumping into bed with just anyone. As Judy Blume rightly puts it, once you’ve done it, you can’t go back to just holding hands. So you have to be one hundred percent sure and not feel rushed or pressured into anything. (am climbing down off my soapbox now, honest!)

CHRISSI: I can’t imagine it ever being taught in the classroom. Not without complaints! Jeez, some parents complain about Roald Dahl in the primary school classroom, so I can just imagine what Forever would bring! I do think, like Beth, that this book should be in libraries and be recommended to teenagers/young adults in Personal, Social and Health Education. It brings with it, some important messages about relationships and consent. Katherine comes across as incredibly savvy and sensible. I really liked her!

BETH: Seriously? This book brought back so many memories for me and reading it as an adult was a very different experience. I recognised the intensity and pressure of the first serious relationship where you think you’re in love but you’ve still got a hell of a lot to learn. It’s strange, but reading it now I’m in my thirties, I related to Katherine’s parents a lot more and was surprised to discover that I felt Michael was being a bit too pushy, sexually speaking whereas twenty years ago I was firmly in the teenager’s corner! Nevertheless, the book will always be special to me as I learned so much from it and may even pass it down to a teenager myself, when I feel the time is right.

CHRISSI: Eek. This is where I hide from my Blume lovin’ sister. I liked Forever, but I don’t love it. I think I’ve just got a huge place in my heart for the Blubber Judy Blume, and her style of writing in Forever just didn’t work for me as much as I wanted it to. It was enjoyable enough and I whizzed through it. I believe there are better YA books out there around the same topic, but hoorah for Judy Blume writing so explicitly for the YA audience in the 70s! You have to commend her for that!