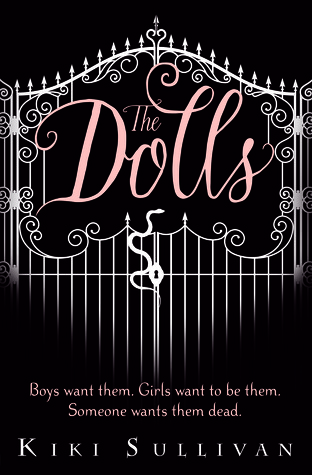 Peregrine Marceau and Chloe St. Pierre are the Dolls. Impossibly beautiful and dangerously powerful, they hold the town of Carrefour under their spell. Yet newcomer Eveny Cheval is not so easily swayed by their glamour – until she discovers she is a Doll too. And when a killer sneaks past the locked gates of Carrefour, only the Dolls’ combined powers can stop the murderer in their midst.

I hadn’t heard much about this book, but I have to say, the cover immediately pulled me in. I had to read it! I found it to be really engaging and interesting to read. I was surprised to see that a lot of my blogging friends haven’t enjoyed this book, but this is why I try to form my own opinion, because I actually really enjoyed this book and I’m glad that I wasn’t convinced to leave it alone.

The Dolls centres around Eveny Cheval and her Aunt Bea. Eveny and her Aunt are moving to Carrefour, where they used to live before Eveny’s mother committed suicide. Eveny gets the feeling that Carrefour is a creepy, dark place to live despite how beautiful it looks and she’s right to be cautious. Strange things happen in Carrefour. Eveny meets a group of teenagers who are know as ‘The Dolls’. She finds out that she used to play with them when they were all younger. She feels connected to them, especially Peregrine and Chloe. Eveny doesn’t trust ‘The Dolls’, but she needs to learn to be with them or at least around them if she wants to know more about her past and what might happen to her in the future. The Dolls is full of intrigue, mystery and murder.

I devoured The Dolls. There was something about it that completely captured my attention. I thought it was a really intriguing storyline and I desperately wanted to know more about it and why Carrefour was as creepy as it felt. The atmosphere in this book is built at a good pace. I couldn’t wait to find out what was going on. I can see why some readers have had trouble with it though. There are some moments that were a little bit too unbelievable or some of the actions were definitely worthy of an eye roll. However, I liked that it was dramatic and over the top. I think it really fit the feel of the story.

The characters were developed well, with some characters I liked and some I really disliked, however, I don’t think there were many stand out characters. This is something that could progress as the series continues. ‘The Dolls’ were very, very shallow, which got a little annoying at points, but it really fit with the story and it didn’t annoy me enough to affect my enjoyment. I just exercised the eye rolling a little more.

I initially thought I was going to give this book five stars, but when I came to review it, I realised how much I disliked the insta love aspect of this book. I don’t like insta love. I’ve said it so many times now, here on my blog. I just think it’s so unrealistic and can really ruin a story for me. I think there could have been so much more intrigue built up, romance wise, but it all seemed a little forced for my liking. Yet, despite the insta love, I find myself intrigued to see where the story goes next. I’m not sure if it would be better as a standalone, but I’m certainly willing to give the next book a try.

Not what I expected, but an intriguing read if you can get past the shallowness of the characters!