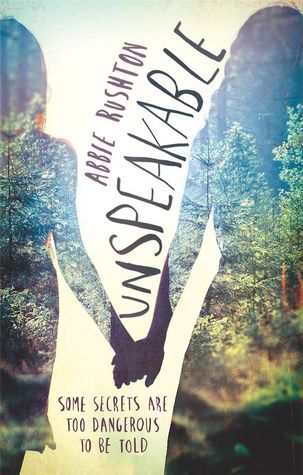 Pushing away the people she cares about is just a small price to pay. Because there are things locked inside Megan’s head – things that are screaming to be heard – that she cannot, must not, let out.

Then Jasmine starts at school: bubbly, beautiful, talkative Jasmine. And for reasons Megan can’t quite understand, life starts to look a bit brighter.

Megan would love to speak again, and it seems like Jasmine might be the answer. But if she finds her voice, will she lose everything else?

I had heard a lot of good things about Unspeakable before I picked it up at YALC in July. I was immediately intrigued by the synopsis, so I wanted to read it ASAP. I thought Unspeakable was a promising debut which didn’t take me long to read at all. It’s really hard to pinpoint the topic of this book. It’s a little bit about relationships (including LGBT), family, friends but it also has an element of bullying throughout.

Unspeakable follows Megan who has experienced something so awful that she has stopped talking. It is not until nearer the end of the story that everything is unravelled. Megan is bullied for throughout the story by Sadie, a girl Megan used to be friends with before the incident happened. An ally for Megan is introduced quite early in the story. Jasmine is new to the school and befriends Megan even though their conversations begin as very one sided until Megan begins to write to Jasmine. Jasmine completely turns Megan’s life around, but Jasmine is also suffering from bullying. Someone is out to get her and the girls try to figure out who is messing around with them.

Unspeakable did keep me guessing, but I’m not sure the end result was entirely believable, which was a little frustrating and is the reason why I could not rate this book any higher than I did.

Unspeakable is a very promising debut. I look forward to the author’s next book!