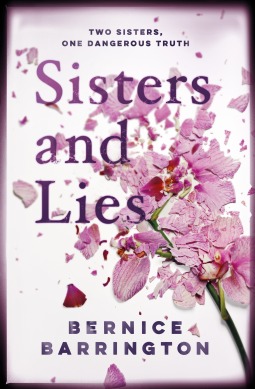 One hot August night, Rachel Power gets the call everyone fears. It’s the police. Her younger sister Evie’s had a car crash, she’s in a coma. Can Rachel fly to London right away? With Evie injured and comatose, Rachel is left to pick up the pieces of her sister’s life. But it’s hard fitting them together, especially when she really doesn’t like what she sees. Why was Evie driving when she doesn’t even own a licence? Who is the man living in her flat and claiming Evie is his girlfriend? How come she has never heard of him? The more mysteries Rachel uncovers the more she starts asking herself how well she ever really knew her sister. And then she begins to wonder if the crash was really the accident everybody says it is. Back in hospital, Evie, trapped inside an unresponsive body, is desperately trying to wake up. Because she’s got an urgent message for Rachel – a warning which could just save both their lives . . .

I am lucky enough to have an awesome sister! I’m intrigued by books that explore the sister dynamic, so even before I read the synopsis of Sisters and Lies, I knew that I wanted to read it.

Sisters and Lies centres around Rachel and Evie. Rachel gets a call explaining that her younger sister Evie has been in a car crash and she’s in a coma. (Worst nightmare ever!) Rachel flies to London immediately to be with her sister. Rachel didn’t expect to learn new things about her sister. Evie’s life is in a mess. She’s living with a man that she’s never told her older sister about and she appears to have been driving his car even though she doesn’t have a driving licence. Rachel learns that Evie has been hiding a lot of things and she wonders if she really knew her sister. We also hear from Evie, trapped inside her comatose body. She’s trying to remember what happened to her and realises she has a warning for her sister, she just can’t wake up to tell her!

I thought Sisters and Lies was a great combination of mystery and drama witha  slice of romance. I really wanted to know what was going on in this story. It certainly kept me turning the pages. I really enjoyed how we heard from Evie as well, as she tried to unfold the events which led up to her accident. It really was a great way to fill in the gaps in this mystery. I absolutely loved Rachel’s dedication to her sister. Even though Rachel is going through a tough enough time in her own personal life, she is there for her sister, desperate for her sister to wake up.

This is an easy to read, dramatic family drama with a wonderful mysterious element. I thoroughly enjoyed it!

A dramatic page-turner! Well worth reading.

6 thoughts on “Sister and Lies”