Welcome to our latest addition of Banned Books. This month we read A Bad Boy Can Be Good For A Girl by Tanya Lee Stone. 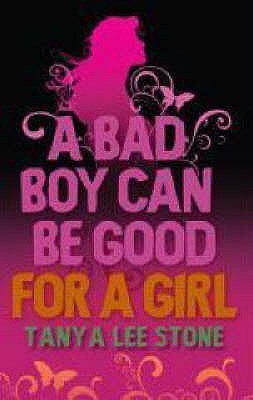 Josie, Nicolette and Aviva are three very different girls who all meet the same bad boy with an irresistible knack for getting into their blood and under their skin. Each is sure that she can keep a cool head about him, but how much are they really in control?

In the Top Ten most frequently challenged books in 2013 (source)

BETH: Like many of the other novels in our series of frequently challenged/banned books this year, this is a fairly recent release and I don’t believe too much has changed in our attitudes to books (either for the worse or the better) in the past ten years. This is one of those books where I can see why people may have had problems with it, mainly due to the sexual content. In that way, I can’t really see it being taught in schools (I can imagine a few red faces, including the teachers!) but I see no reason why it can’t be stocked in a school library for teenagers to read on their own time as I do feel it has some important messages.

CHRISSI: I was surprised at how recent this book was. I don’t know why, but I thought it had an ‘older’ feel to it. As I was reading the book, I realised that it wouldn’t be a great classroom read. It is indeed, sexually explicit. That’s not to say that I don’t think it should be available to teens. I do. As Beth says, it would be great to be stocked in the library. Sadly, I don’t see that likely to happen in many school libraries due to its content.

BETH: See previous answer! I probably don’t agree with ALL of the reasons for challenging this book to be honest and as I mentioned, I do believe it’s important for teenagers to have access to it but I can’t remember any instances of offensive language or references to drugs. Everything mentioned in this novel I feel is part of a normal, curious adolescence and will be things that teenagers are likely to come across during this period in their lives. Wrapping them up in cotton wool and shielding them from the cold, hard facts of life I feel will do more damage than good in the long run.

CHRISSI:  As I said, I can see why this book wouldn’t be used in the classroom. However, I think it’s an accurate representation of adolescence and certainly think it should be available for teenagers. I think all too often teenagers are shielded from this kind of read and there’s no reason for that!

BETH: There were lots of things to like about this book. Firstly, it’s a very quick read, partially because the entirety of the novel is written in prose which makes it both interesting and easy to whizz through – I think I finished it in about an hour? We get to hear three teenage girls points of view when they meet, date and in some cases sleep with the notorious “bad boy” of the school and how this affects them emotionally as a result when he gets the only thing he really wants from their relationships – sex. I think it’s really important for teenage girls struggling with new, very adult emotions and who may be feeling particularly vulnerable to reassure them that they are not alone and that they don’t have to do anything that they may not feel ready for.

CHRISSI: I really enjoyed this book. I didn’t expect to whizz through it as much as I did. It helps that the book is in prose as it really picks up the pace of the book. It’s one of those where I kept thinking ‘just one more snippet’ and before I knew it I was finished. I don’t think it’s an overly memorable read, but I think it’ll be relatable to so many teens!