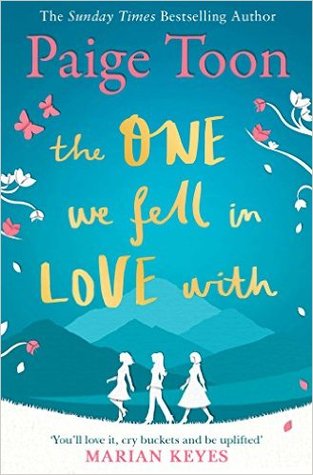 Phoebe is caught between a rock and a hard place. Settle down and get married, or return to the French Alps to pursue her passion?

Eliza is in love with someone who is no longer hers. In fact, he probably never was… And her dream of becoming a musician seems to be spiralling down the drain.

Rose is out of a job and out of a boyfriend. To make matters worse, she’s been forced to move back in with her mother…

But these very different girls have one thing in common. Angus. The one they fell in love with…

Paige Toon is one of my favourite writers in the chick-lit genre. I have absolutely loved her books in the past, but felt some of her books were becoming a little predictable. However, Paige is one of my autobuy authors. I buy everything she releases without a second thought. I am thrilled to say that The One We Fell In Love With is a brilliant addition to Paige Toon’s catalogue. I think this is because even though it had its typical Paige Toon moments (not a criticism, I love Paige Toon’s writing style) there was quite a serious twist in the story. It gave the story much more depth which I really enjoyed.

The One We Fell In Love With follows three points of view. It follows identical triplets Rose, Eliza and Phoebe. They are all connected to Angus. They have all been in love with him at some point. I can’t say much more than that because it really would ruin the story. It’s better to not have a clue about what was coming which was certainly the case for me. I didn’t see the twist coming, but I’m pretty sure you’ll love it when it does come. It changed my rating of the story that’s for sure. It wasn’t expected.

Apologies for the vague and rather brief review, but I really don’t want to ruin the reading experience for other readers. In this book you’ll find some amazing characters and a gripping storyline. I adored the triplets, two more than the other, but that’ll become clear if you read it. I also really loved the character of Toby. He was so easy to like and to root for.

If you are into this genre, then I highly recommend picking up The One We Fell In Love With. Then go back and explore Paige Toon’s back catalogue. She has some gems!

Paige Toon has created another wonderful book. I highly enjoyed it!

2 thoughts on “The One We Fell In Love With”