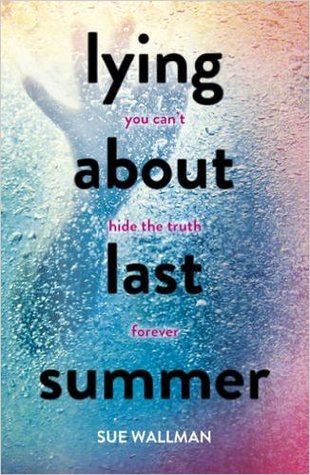 The story centres around a girl called Skye, who is sent to a camp for troubled teenagers after her sister dies in an accident. However, once she is at the camp she starts receiving text messages from someone pretending to be her dead sister.

Thoughts before you started reading Lying About Last Summer?

CHRISSI: Love the cover! Simple but effective. I hope the story inside is good.

LUNA: Lying About Last Summer was one of the titles highlighted at the Scholastic Brunch I attended and I’ve been intrigued by it ever since.

What did you think of Skye?

CHRISSI: At first, I wasn’t sure what to make of her. I think I’ve read too many books recently with unreliable narrators so I end up going into stories, especially books like this one, very suspicious of the main characters. As the story progressed I really warmed to Skye. I felt for her. I can’t even imagine what it must feel like to carry the guilt she did as she attempted to move on.

LUNA: I never connected to Skye the way I wanted to but she was a convincing narrator. I think if I’d had a stronger connection with Skye the story might have had a different impact, but the book was engaging and intriguing without me having to be best friends with the main character. One thing I did really like about Skye was her internal dialog.

CHRISSI: I really enjoyed how the mystery element was played out. I thought the use of flashbacks was really effective. Flashbacks don’t always work for me, but I felt like they were well done in this story. They helped us get to know Skye even more.

LUNA: Sue Wallman’s portrayal of grief, not just how Skye dealt with it but all the characters. There is no one-size-fits-all and it was good to see that reflected in the story.

CHRISSI: It’s not a worst bit as such, but I didn’t enjoy the ending as much as I wanted to.

LUNA: The revelation about who’s sending the messages, or rather Skye’s reaction to it.

CHRISSI: Joe. He intrigued me!

LUNA: Ok so surprisingly Fay’s and her story. Not the actual ending (which I’m a bit mixed about) but how Fay begins to lose herself. Skye’s opinion of Fay is negative and it does impact your own as the reader. But once I took a step back and looked at Fay’s perceptive it changed my view of her as a character. I ended up developing quite a soft spot for her.

Was Lying About Last Summer what you expected?

CHRISSI: I didn’t expect it to cover grief as well as it did. It had some really intriguing moments and kept me gripped throughout.

2 thoughts on “Comparing ‘Lying About Last Summer’ by Sue Wallman”