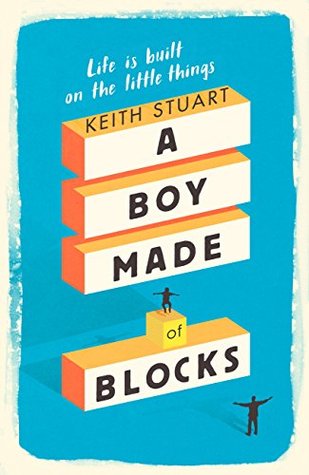 How did I get it?:
NetGalley- thanks to Little, Brown

Alex loves his family, and yet he struggles to connect with his eight-year-old autistic son, Sam. The strain has pushed his marriage to the breaking point. So Alex moves in with his merrily irresponsible best friend on the world’s most uncomfortable blow-up bed.

As Alex navigates single life, long-buried family secrets, and part-time fatherhood, his son begins playing Minecraft. Sam’s imagination blossoms and the game opens up a whole new world for father and son to share. Together, they discover that sometimes life must fall apart before you can build a better one.

Inspired by the author’s own relationship with his autistic son, A Boy Made of Blocks is a tear-jerking, funny, and, most, of all true-to-life novel about the power of difference and one very special little boy.

I am always really interested in reading debut novels, especially when they are about subjects that I find fascinating. I am a primary school teacher, so I have some experience working with children with autism. This coming school year (4 days-eek!) I will have two children with autism in my class. Therefore, I have quite the interest in reading books that centre around autism. I was especially interested when I found out that this book was inspired by the author’s own relationship with his autistic son. As soon as I knew that, I was certain that A Boy Made of Blocks was going to be a realistic, gritty read about autism. It’s exactly that and lots more besides.

A Boy Made of Blocks centres around Alex and his son Sam. Alex is very much struggling to deal with his son, Sam. Alex hides away from his responsibilties and throws himself into work. Alex’s wife Jody, is left to deal with Sam’s meltdowns and struggles. Jody reaches breaking point and calls for a trial separation. Alex moves in with his best friend. Soon after, Alex is made redundant. Alex begins to adapt to a single life and works on building a relationship with Sam. He tries hard to understand his son’s needs. Alex and Sam’s relationship begins to develop even further with the help of Minecraft. Sam becomes absolutely engrossed in building Sam and Daddy’s world. A Boy Made of Blocks explores all of the relationships in Alex’s life as he also begins to deal with the past to move into the future.

I absolutely adored this book. I really enjoyed reading from Alex’s point of view. At times, especially at the beginning, Alex really frustrated me. Reading from his point of view really helps the reader to see how much Alex is struggling and is anxious about Sam’s behaviour. It is written so honestly. It’s so believable. Before I knew it, I liked Alex. I appreciated his honesty and was touched at the changing relationship between Alex and Sam. Alex grew so much as a character throughout the story- it was clear that he was struggling with his past and this was affecting his relationship. It was clear to me, that Alex did care about his son, he just found it hard to connect with him.

A Boy Made of Blocks made me feel so many emotions. From anger to amusement, frustration and sadness, this book really did have it all. Sam himself, absolutely captured my heart. He was so adorable. I loved his courage and his thoughtfulness. It’s so true, that to a child with autism, the world is so confusing. I felt like this book captured that feeling so honesty, so perfectly. Sam surprised his dad so many times and those moments were beautiful.

As for Minecraft itself, I’m no gamer, but I know how much young children are obsessed with that game. So I really did believe that it could be as powerful as it was in this story.  I loved how it helped Alex and Sam to bond. It really was a touching, poignant moment every single time they played together. It warmed my heart.

I don’t know how Keith Stuart managed it, so masterfully, but there were also some more relationships within the story and other threads as well. We have Alex’s sister Emma and her strained relationship with their mother. We have another couple’s relationship and some other characters along the way that spice up the story. I loved how it all came together in the end. It really was seamless, realistic and it made total sense.

This is an absolutely outstanding debut novel. I couldn’t put it down. It is clear that Keith Stuart really understands the condition through his own experience with his son. It made this book incredibly raw to read. It takes the reader along on a very bumpy journey, as it often is with autism.

This book is hands down one of my favourites of the year so far. Touching, real and honest. An outstanding debut from Keith Stuart!

4 thoughts on “A Boy Made Of Blocks”