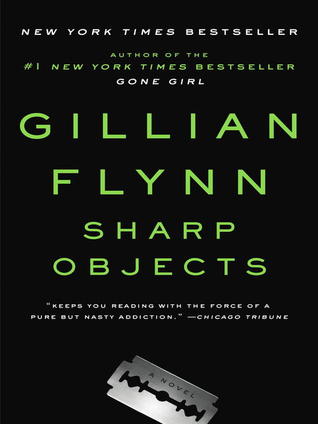 WICKED above her hipbone, GIRL across her heart
Words are like a road map to reporter Camille Preaker’s troubled past. Fresh from a brief stay at a psych hospital, Camille’s first assignment from the second-rate daily paper where she works brings her reluctantly back to her hometown to cover the murders of two preteen girls.

NASTY on her kneecap, BABYDOLL on her leg
Since she left town eight years ago, Camille has hardly spoken to her neurotic, hypochondriac mother or to the half-sister she barely knows: a beautiful thirteen-year-old with an eerie grip on the town. Now, installed again in her family’s Victorian mansion, Camille is haunted by the childhood tragedy she has spent her whole life trying to cut from her memory.

HARMFUL on her wrist, WHORE on her ankle
As Camille works to uncover the truth about these violent crimes, she finds herself identifying with the young victims—a bit too strongly. Clues keep leading to dead ends, forcing Camille to unravel the psychological puzzle of her own past to get at the story. Dogged by her own demons, Camille will have to confront what happened to her years before if she wants to survive this homecoming.

I have been meaning to read Gillian Flynn’s previously released books after enjoying Gone Girl so much. I had high expectactions, especially when I heard they were amazing. I did really enjoy Sharp Objects but for me, it didn’t quite match up to the Gone Girl experience. I am, however, really excited about reading Dark Places.

In Sharp Objects we follow Camille who is a reporter in Chicago. Camille is assigned to cover a suspected serial killer case in her old hometown. She knew she had to take it because Camille really needs the job. Camille knew that going home meant facing her mother who she was estranged from. Camille wants to report the case quickly and get back to Chicago, but it’s more complicated than that. Camille finds herself facing her past and confronting demons.

I really thought that Sharp Objects was going to be a bit of a crime book, but it’s much more than that. It does totally turn into a psyschological thriller where you’re left doubting most of the characters and their intentions. We explore mental health and unhealthy relationships. The reader gets to explore the possible motives behind the murders of two young girls. The town is really small, so the police aren’t used to handling such crimes. The trouble is, the secrets go much deeper than anyone might have imagined.

Sharp Objects is incredibly dark as you might expect from an author like Gillian Flynn. Everything has a much darker slant and I felt so uneasy throughout my reading experience. I always feel like Gillian Flynn creates female characters that are so easy to dislike. There were certainly several of them throughout this story. I love being pulled in by strong characters and Gillian Flynn really is a genius at creating such characters!

Strong characters and an uneasy atmosphere makes for a wonderful read!