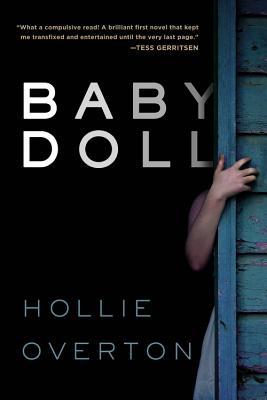 How did I get it?:
I borrowed it from Beth.

Held captive for eight years, Lily has grown from a teenager to an adult in a small basement prison. Her daughter Sky has been a captive her whole life. But one day their captor leaves the deadbolt unlocked.

This is what happens next…

…to her twin sister, to her mother, to her daughter…and to her captor.

CHRISSI: Hollie Overton is a TV scriptwriter- does this show in the way that she has structured this thriller?

BETH: Yes, I definitely think it does! It’s a fast paced, exciting thriller that had me on the edge of my seat but in the way it was written, it was almost like seeing a film in my head as each scene unfolded. I could picture every character and every moment so completely it was like the images were right there in front of me.

BETH: Discuss the relationship between Lily and Abby before and after her disappearance.

CHRISSI: I actually felt that the relationship between Lily and Abby was quite intense. I don’t know if it’s because they were twins, they had an even stronger connection than ‘normal’ sisters. I felt that their relationship became even more intense after her disappearance. It was clear to me that Abby felt so much love for her sister. She would do anything for her and was eager to protect her. My interpretation was that Abby felt more strongly for her sister, I felt that Lily could potentially be a little manipulative…

CHRISSI: We read a LOT of books in this genre. Do you think that this book stand out in a such a populated genre?

BETH: We certainly do. I think it’s one of our favourite genres to read but there is a risk that the market can get over-saturated with novels that all read like the same book. With Lily being captive for eight years and having had her jailer’s baby it felt very much like Room by Emma Donoghue and I was slightly worried that it was going to be the same thing. Then I was worried that it would have a lot to live up to being compared to Room (which is one of my favourite books ever) and wasn’t going to compare well. Luckily, Hollie Overton throws in many different plot devices and characters that kept it from being too similar. Especially with the ending!

BETH: What do you think Rick’s reasons were for capturing Lily and how do you think his attitude was to women in general?

CHRISSI: Rick honestly made my skin crawl. Just thinking of him now creeps me out and he’s a fictional character. I feel like Rick had an idea of what his perfect, young partner would be and that was Lily. I really disliked his attitude towards women. The fact that he was a teacher as well just didn’t sit right with it, it being my profession. I think he saw women as an object he could just manipulate. Ew. Didn’t like him.

CHRISSI: This book is as much about the consequences that a crime like this can have on a family as it is about the crime itself. Discuss how the different characters react to what has happened.

BETH: Lily’s poor family definitely go through the mill when she is captured and kept hostage for eight years in a basement. They have no idea whether she is alive or dead and their lives are ruined. Her father ends up passing away although the relationship between father and mother appears to be fraught and difficult just after Lily’s disappearance and prior to his death. After that, her mother has casual relationships with a few different men but doesn’t seem to be able to settle down again. Probably the worst affected though is Lily’s twin sister, Abby who blames herself for what happened to Lily, becomes depressed and suicidal and a bit of a “wild child.,” as she struggles to cope with what happened to her sister.

BETH: You’ve given this book quite a high rating. Was there anything about it you disliked?

CHRISSI: Apart from Rick? Ew. I thought that there were some unnecessary scenes in the book. I also didn’t think the relationship between Abby and Wes was overly believable which is why it didn’t get a 5 star treatment from me. I was actually quite surprised that this book has such mixed reviews. I couldn’t put it down!

CHRISSI: Without spoilers, did you predict the ending?

BETH: No way! The author really surprised me, to be honest. I expected this novel to be a bit predictable but right at the end she throws in a major plot twist which I totally wasn’t expecting and which I was delighted by. I had found some parts of the book a teensy bit unrealistic/unbelievable but how she chose to end the novel really altered my opinion of the entire book.

3 thoughts on “Talking About ‘Baby Doll’ by Hollie Overton”