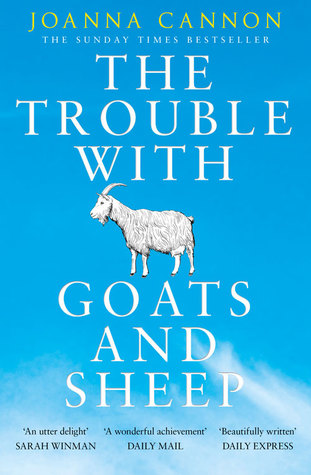 Mrs Creasy is missing and The Avenue is alive with whispers. As the summer shimmers endlessly on, ten-year-olds Grace and Tilly decide to take matters into their own hands.

And as the cul-de-sac starts giving up its secrets, the amateur detectives will find much more than they imagined…

CHRISSI: What were your first impressions of this book?

BETH: I was already pre-disposed to like this book, I had heard really good things about it from a friend of mine and the title was just too good to resist! I almost couldn’t believe it was a debut novel when I first started reading it, it felt like I was reading a book where the author had been established and writing for years. I was initially confused by some aspects of the story – but in a good way, I just wanted to know what exactly was going on and the author is very good at the “slow reveal,” shall we say?

BETH: Who were your favourite characters in the novel and why?

CHRISSI: The cover of this book is quite simple. Why do you think they went for this choice?

BETH: I actually love how simple the cover is. It’s a lovely shade of blue with just a single goat on the front. No sheep though! 😊 The title is actually described quite early on in the book but I don’t think it’s a spoiler to say that the two young girls are trying to find God and they have been told by the local vicar that God prefers his people to be a flock of sheep rather than goats. The story is quite simple in the end, coming down to separating these people into the two categories (or can they really be separated?) so I think the cover is perfect for what the novel is.

BETH: What did you think about the relationship between friends Grace and Tilly? Was it typical of a female friendship at that impressionable age?

CHRISSI: I’ve mentioned in the previous answer that I really enjoyed the relationship between Grace and Tilly. I did like reading about them because it was so realistic. I felt like Grace was the more dominant friend and I do feel that friendship at that impressionable age can be like that. I felt like Grace thought she had to watch over Tilly and I loved that protective quality that Grace had. There are moments when Grace doesn’t treat Tilly well and I think that is true of a female friendship at that age. Children can be insensitive towards others and hurt them deeply because they still have a lot to learn.

CHRISSI: What do you think the setting of the heat wave of 1976 adds to the story?

BETH: The heatwave is almost a character in itself, it is mentioned so often and people are obviously suffering because of it. I think people have heard about the heat doing funny things to people’s characters…making them snap, do odd things etc and I think the heat actually has a huge affect on the characters in the story in exactly this way. Perhaps the heat exacerbates the situation and causes people to over-react where they might not normally do so?

BETH: How do you think the mystery of where Mrs Creasy had gone was played out in this novel?

CHRISSI:  The mystery of Mrs Creasy was very intriguing throughout the story. I have to agree that it’s very much a slow reveal and at times, I did start to lose a bit of interest in the story which is why I haven’t rated it higher. I enjoyed reading about the worry of the secrets that Mrs Creasy had taken with her. I felt like that was more important to her neighbours, rather than genuine concern about where she was.

CHRISSI: Many characters in the story have secrets and regrets – how do you judge the actions they have taken? Does it make you consider how we judge people without really knowing them?

BETH: Yes, yes, yes. I don’t think any character really comes out and apologises for their behaviour outright but you can definitely sense the guilt, the regret and a cooling of tempers, especially to the object of most of the characters anger. It felt very much when I was reading it sort of like a mob mentality with each character being “egged on” by what another would say/feel or do. This kind of behaviour becomes very dangerous when multiple people jump on the bandwagon so as to speak, as we can see from the events that occur.

CHRISSI: Yes! I can’t believe that this book was a debut. It seemed incredibly accomplished! I enjoyed this book.

2 thoughts on “Talking About ‘The Trouble With Goats and Sheep’ with Bibliobeth!”