Welcome to this month’s edition of Banned Books where Beth and I have read The Curious Incident of The Dog In The Night-Time by Mark Haddon. 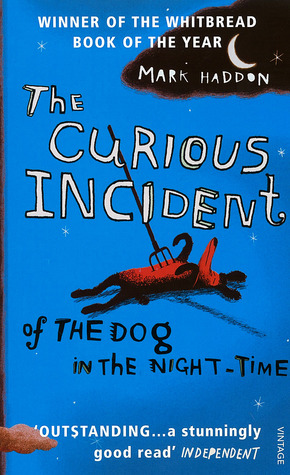 The Curious Incident of the Dog in the Night-Time is a murder mystery novel like no other. The detective, and narrator, is Christopher Boone. Christopher is fifteen and has Asperger’s, a form of autism. He knows a very great deal about maths and very little about human beings. He loves lists, patterns and the truth. He hates the colours yellow and brown and being touched. He has never gone further than the end of the road on his own, but when he finds a neighbour’s dog murdered he sets out on a terrifying journey which will turn his whole world upside down.

The Curious Incident Of The Dog In The Night-Time by Mark Haddon
First published: 2003
In the Top Ten most frequently challenged books in 2015 (source)
Reasons: offensive language, religious viewpoint, unsuited for age group, and other (“profanity and atheism”)

BETH: First of all, I can’t believe that this book is now fourteen years old! That blows my mind. Chrissi and I read it not long after it had first come out and it’s one of those books that we’ve both kept on our favourite shelves, such was the impact it had on us. Things haven’t changed that much in the last fourteen years so my opinion is going to be the same for the first two questions. (We may be a little biased also because it is one of our favourite books!) Only one of the reasons I can accept as being an accurate reflection of what is in the book but that is not to say that I necessarily agree with it.

This is the offensive language reason which, although I don’t think it’s particularly over-used in the novel but I admit there are several instances of swearing and even one instance of the “c” word which may offend some people and fair enough. You are entitled to be offended by foul language – that is your prerogative. However, I don’t see bad language as a reason to ban/challenge a book outright as I don’t think you can shield children from things they are more than likely to hear in the playground/on television/in the streets if they don’t read it in books.

CHRISSI: Fourteen years old. That’s crazy! I still remember reading it for the first time and being really impressed. On my re-read I was just as impressed. To be honest, I can see why it might be challenged due to profanity, but that’s not to say I don’t agree with it. Some children are exposed to profanity in their every day lives and I don’t think challenging a book because of that is the right thing to do. I can almost guarantee that this book wouldn’t be the first time children had heard bad language. Would I read it in the classroom? No. But it still deserves to be in the library just waiting to be explored.

BETH: Same answer – I don’t agree with the reasons for banning/challenging this book. Particularly those that wax on about a religious viewpoint/atheism. Personally, I love learning about beliefs from all over the globe from a variety of different people and I really can’t remember an instance in this book where I felt like the character’s religious views were shoved down my throat. I’ve read books before that fall into the “preachy” line and was immediately put off however this was unequivocally NOT this kind of book. As for it being inappropriate for the age group (young adult) – seriously what was so appalling that a well-adjusted or even not so well adjusted teenager should be protected from this book??

CHRISSI: Again, I wouldn’t personally use it in the classroom with teenagers (if I taught teenagers!) but I’d highly recommend it to them to read as an independent choice. Yes, there’s bad language, but as I mentioned before they’ll hear it anyway. I teach a boy with Asperger’s and I could recognise so many qualities in our main protagonist. I believe that many people with autism could find something special in this book. Those that don’t, can get an insight into what life is like for those with ASD.

BETH: Well, this is pretty obvious I guess….I loved it! I’m always worried when reading an old favourite that I won’t enjoy it as much as I did previously however this definitely wasn’t the case. In fact, I feel I got even more from the book than I did on the first reading and especially loved the additional illustrations and maths problems that broke up the text and gave us a real insight into the mind of Christopher. It is so important that conditions such as Asperger’s are highlighted and I think a book like this could really help anyone with it or those who know someone with it. For me, it was an education and I thoroughly enjoyed it.

CHRISSI: I really enjoyed rediscovering this book. As I mentioned, I have experience with children on both ends of the spectrum and it reminded me how difficult life can be for them. It made me feel super proud of their day-to-day achievements.

CHRISSI: Without a doubt!