Welcome to April’s edition of Banned Books, where Beth and I read a banned book, once a month! This month was Habibi by Craig Thompson. 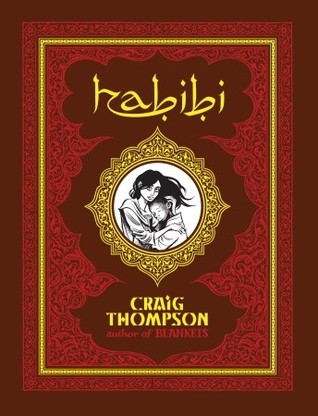 Sprawling across an epic landscape of deserts, harems, and modern industrial clutter, Habibi tells the tale of Dodola and Zam, refugee child slaves bound to each other by chance, by circumstance, and by the love that grows between them. We follow them as their lives unfold together and apart; as they struggle to make a place for themselves in a world (not unlike our own) fueled by fear, lust, and greed; and as they discover the extraordinary depth—and frailty—of their connection.

At once contemporary and timeless, Habibi gives us a love story of astounding resonance: a parable about our relationship to the natural world, the cultural divide between the first and third worlds, the common heritage of Christianity and Islam, and, most potently, the magic of storytelling.

BETH: As a fairly recent release (2011), there aren’t going to be many differences in my opinions as I don’t really believe attitudes have changed that much in the past six years or so. I’m finding expressing my opinions about this graphic novel quite difficult and apologies if my words aren’t coherent! I have such mixed views on this book, you see. The good, the bad and the downright ugly. Can I see why it was challenged/banned? Well, er….yes I kind of can. This is NOT to say that I agree with banning books, not in the slightest! I can however see why this book may have been controversial. There are a LOT of adult themes in the books that may not be suitable for younger readers mainly involving rape and graphic sexuality. Of course the book should be available to read but perhaps not in settings where much younger children have access to it.

CHRISSI: Like Beth, I don’t agree with banning books as I don’t think people should be ‘told’ what they can and cannot read. However, this book is one of those books that it’s easy to see why it’s challenged. It’s certainly controversial and it deals with many contentious issues. There’s some quite graphic sexuality, nudity and rape which isn’t suitable for younger readers in my opinion. I’m not sure if this book is intended to be for adults, but that’s certainly what it came across to me. A work of adult literature!

BETH: See previous answer! So the reasons for banning/challenging this graphic novel are nudity which there is an abundance of. Seriously, every other page seems to have a naked character on it (probably 95% of them are female, I have to say which I’m not going to even get into but which made me slightly uncomfortable for my own feminist sensibilities). Then there’s the fact it’s sexually explicit and that is certainly the case. Naked bodies are not a bad thing don’t get me wrong but some of the sexual scenes which mainly involve sex that is non-consensual are incredibly graphic. Finally, it states that it’s unsuited for the age group. Here’s where I have a bit of confusion. I don’t know what age group it’s actually meant to be aimed at? Yes, it’s a graphic novel which may make you automatically think of younger readers, however the themes are so adult that it cannot be anything but an adult read.

CHRISSI: I can see why it’s challenged. I read a wide range of literature, but this one made me feel particularly uncomfortable and that’s quite something!

BETH: First of all, this book is absolutely beautiful. It’s a beast at about 700 pages long but don’t be intimidated by it’s size, I read it quite easily in two sittings in the space of a couple of hours. The illustrations are fantastic and some parts of the story I really enjoyed but other parts….I could just see why it may be offensive, especially to some cultures and religions. I didn’t really enjoy the stories within stories that talked about the similarities between Christianity and Islam as religions either which is strange as I normally like that sort of thing. In this novel however, it just made the narrative feel quite bumpy – if that’s the right word!

CHRISSI: Despite my uncomfortable feeling whilst reading this book, it didn’t take me long to read at all. I found it interesting in parts and offensive in others. It was a mixed bag for me, like Beth, but I’m leaning more towards not enjoying the reading experience.

BETH: I’m going to say maybe as I think some people will love it, other people will not so much. It’s a Marmite kind of book!

CHRISSI: It’s not for me!- Others might enjoy it,  but it was too much for me.