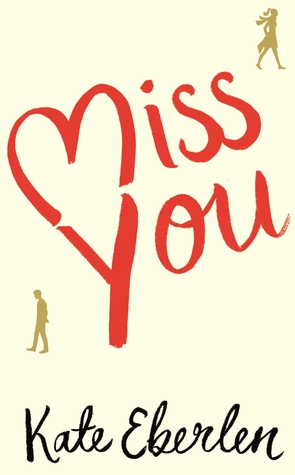 Tess and Gus are meant to be. They just haven’t met properly yet. And perhaps they never will . . .

Today is the first day of the rest of your life is the motto on a plate in the kitchen at home, and Tess can’t get it out of her head, even though she’s in Florence for a final, idyllic holiday before university. Her life is about to change forever – but not in the way she expects.

Gus and his parents are also on holiday in Florence. Their lives have already changed suddenly and dramatically. Gus tries to be a dutiful son, but longs to escape and discover what sort of person he is going to be.

For one day, the paths of an eighteen-year-old girl and boy criss-cross before they each return to England.

Over the course of the next sixteen years, life and love will offer them very different challenges. Separated by distance and fate, there’s no way the two of them are ever going to meet each other properly . . . or is there?

CHRISSI: Did you judge this book by its cover? I can imagine it’s one you wouldn’t pick up if you saw it in the shop!

BETH: Do you think just because you’re my sister you know me? Haha, of course you’re right, I have to be honest. This cover would immediately make me scrunch up my face in the way that you know so well and I wouldn’t necessarily pick it up because of that. I’m not the biggest romance fan in the world and it has to be told in just the right sort of way to touch this cold, cold heart. No cheesiness here please! But, as you know, I have been completely wrong about covers in the past… Me Before You by Jojo Moyes is a classic example!

BETH: How do you think that this book compares with others in the genre?

CHRISSI: Interesting question! As you know, I have read quite a lot of this genre, so I feel like I’m well informed to answer this question. I think it fits nicely into the genre, but it’s not necessarily a book that I think stands out. Don’t get me wrong, it was easy to read and I enjoyed it, but it’s not one that will stay with me for a long time.

CHRISSI: Both Tess and Gus experience bereavement in this novel. Discuss how the different characters deal with this situation.

BETH: Both Tess and Gus have lost someone important in their lives. With Tess, it is her mother who died of cancer and with Gus it is his older brother who died in a horrific skiing accident on holiday. They both deal with their loss in very different ways and I think a lot of that is bound up with how close they were with their respective loved one. With Tess, it’s her mother so of course she feels the loss keenly but has to get on with things as she has a younger sister, Hope to bring up and look after. This completely ruins any plans she had for university but she is incredibly strong as a character and just gets through it. Gus on the other hand, feels constantly guilty for the loss of his brother, Ross. He feels he is in some way to blame for the accident as he “let” Ross go off on his own down a dangerous slope. Coupled with this is the fact that Ross has constantly bullied and belittled him throughout their lives prior to the accident so they didn’t have the best or most loving relationship which he also feels some residual guilt for.

BETH: Which character’s point of view did you enjoy reading about the most?

CHRISSI: My answer would have to be Tess. I really enjoyed reading about her story. I think the main reason for this is the relationship Tess has with her younger sister. I called Asperger’s before it mentioned it in the story. I have children with both low functioning autism and high functioning autism (Asperger’s) in my class and I could recognise the traits immediately. I loved how, even though Tess struggled with not following her dreams, she was there for her sister. I was rooting for Tess from the start and hoping she found some happiness for herself.

BETH: I really enjoyed the structure of this novel. It’s told in dual perspectives so one chapter is Tess’ point of view and the next is from Gus. It also starts in the late nineties when they are both eighteen years old and ends in the present day. I really enjoyed this as I am a similar age to the characters and enjoyed the nostalgic feel that the author brought when talking about certain things in the nineties that I remember very clearly! I also loved how we got hints of the “tall man,” or “tall woman,” aka Gus/Tess when they almost met so many times during the narrative.

BETH: Do you believe that some things are just meant to be or is everything just chance?

CHRISSI: Did your initial impressions of this book change by the ending?

BETH: I’m afraid it did and I’m sad to say, not in a good way 😞. I did love that what I expected to happen did happen which pleased me for the characters sake but unfortunately, it did feel slightly cheesy by the end and they were way too quick to say the “three magic words,” which made me believe in them and their relationship a little less. Apart from that though, I was really enjoying their story up to that point!

BETH: Would you read another novel by this author?

CHRISSI: I think I would. I did enjoy reading it and it didn’t take me long to read at all.

4 thoughts on “Talking About ‘Miss You’ with Bibliobeth”