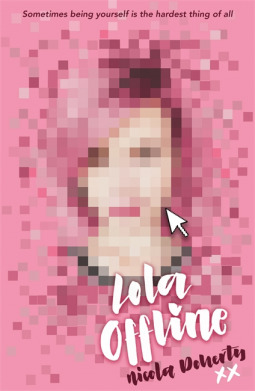 How did I get it?:
NetGalley- thanks to Hatchette Books

Love And Other Man-Made Disasters

She’s left school, changed her name and moved to Paris. It’s not what she planned but there’s no other choice, because she did something bad. Something nobody will forget. It made her trend on Twitter, and it’s the first thing that comes up when you google her.

Paris is a new start, with new friends – like socially inept geek Ben, keyboard warrior Vee, and the impossibly perfect Tariq, but could the City of Lights offer more? Awkward dates, accidental afternoon drunkness and a perfect kiss; Delilah’s life as a normal teenager is seemingly back on track, or is it?

Sometimes learning to be happy with yourself is the hardest lesson of all.

Sometimes I love to read books that I know won’t take me long and they’ll be enjoyable. I thought this would be the case with Lola Offline and it really was. Lola Offline was a quick and easy to read book which will be perfect for fans of teenage fiction, especially those into social media.

It centres around Delilah. Delilah makes a stupid mistake online (like so many of her age and beyond!) she jokes about something and it is taken seriously. Delilah is labelled a racist and shunned by her peers. Delilah decides that she wants to start afresh somewhere. She moves to Paris. A fresh start. Delilah now goes by the name of Lola, leaving her past behind so that her new friends can’t google her and find out about her past that shames her. Lola meets some new friends and falls in love with Paris. However, Lola’s life isn’t back on track as it doesn’t take long for the truth to come out. Lola’s new peers react in different ways. Lola (Delilah) really has to learn about herself and how she can be move on from her past and be genuinely happy once more.

I thought this was a decent read which highlighted the issues around social media. It’s not just social media, sometimes words can be completely taken out of context even when they’re vocalised.I think this is such an important read for the modern day teenager who can quite often spend a lot of their time on social media. It’s about the perils of social media and how one comment can go viral easily and affect your life.

It’s a story about how words can hurt more than just yourself.