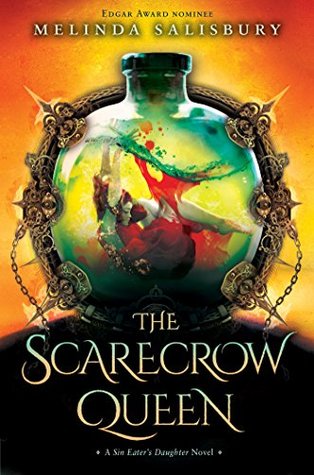 As the Sleeping Prince tightens his hold on Lormere and Tregellan, the net closes in on the ragged band of rebels trying desperately to defeat him. Twylla and Errin are separated, isolated, and running out of time. The final battle is coming, and Aurek will stop at nothing to keep the throne forever . . .

Explosive, rich and darkly addictive, this is the stunning conclusion to Mel Salisbury’s internationally best-selling trilogy that began with The Sin Eater’s Daughter.

I went into reading The Scarecrow Queen with very high expectations. I absolutely loved the first two books in this series. I did enjoy The Scarecrow Queen but it wasn’t quite what I wanted it to be. As I’ve mentioned before, it’s so tricky to review a final book in a series as you don’t want to spoil it for anyone that hasn’t got so far. So, I’ll attempt to keep this review brief and as spoiler free as possible!

This instalment follows the story in three parts. In the first part, Twylla is travelling through villages looking for a way to stop Aurek. Twylla’s journey isn’t an easy one. She’s met with lots of obstacles in her way but she persists, eager although not confident to fight Aurek and win. In the second part, we follow Errin who is being held captive by Aurek. Aurek is forcing her to do anything he wants. Errin has an ally though and is planning her escape. In the third part the stories come together and the reader discovers whether Aurek can truly be defeated.

The Scarecrow Queen has a lot going for it. The plot certainly kept me turning the pages and I thought the pacing of the story was spot on. Every time I picked it up, I had some problems putting it down. I really enjoy Melinda Salisbury’s writing style. She is fantastic at capturing your attention and your imagination.

I absolutely love how there are two kick-ass female characters at the heart of this story. I loved reading about their experiences in building an army against Aurek. I was desperate for him to be beaten. I think my problem with this instalment in the trilogy is that I felt that some of the characters seemed to blend into the background. I wanted more from some of the other characters (like Silas) who were so prominent in the prior books.

My little niggles aside, I would totally recommend this series because I think it stands out in the YA fantasy genre. I’m glad that I’ve read it!

Although I wasn’t blown away by the ending of this trilogy, I have really enjoyed reading this series! Worth checking out if you’re into YA Fantasy!