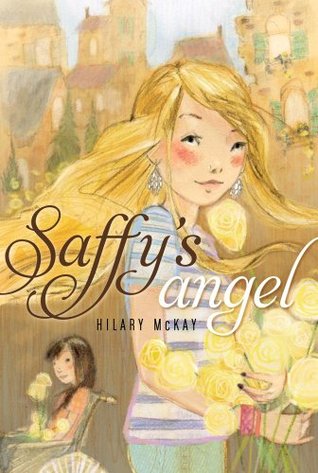 The four Casson children, whose mother, Eve, is a fine-arts painter, have all been given the names of paint colors. Cadmium (Caddy), is the eldest; then Saffron (Saffy); Indigo, the only boy; and Rose, the youngest. When Saffy discovers quite by accident that she has been adopted, she is deeply upset, though the others assure her that it makes no difference at all. Saffy is the daughter of Eve’s twin sister, who lived in Siena, Italy, and died in a car crash. Grandad brought Saffy, as a very small child, back from Siena.

At Grandad’s death he leaves something to each of the children. To Saffy, it is “her angel,” although no one knows its identity. How Saffy discovers what her angel is, with the help of an energetic new friend, lies at the heart of this enchanting story. Unforgettable characters come alive in often deeply humorous and always absorbing events to be treasured for a long, long time.

I hadn’t heard of Saffy’s Angel before it was picked for our kid-lit challenge. I don’t know what I was expecting really, as I didn’t read anything about the book prior to reading it. I just jumped into it. I found a quintessentially British children’s book.

Saffy’s Angel is about an eccentric family. It’s about a family of four children whose mother named her children after paint colours. The mother in the story is a painter. The father is absent for most of the story! The four children are close to one another and get up to much mischief! Saffron finds out about her younger years which leads to her stowing away to Italy in search for Saffron’s inheritance, a missing stone angel.

I thought this was such a charming little story. I found it incredibly easy to read. It felt like a very British book! It really warmed my heart. I could imagine myself loving this book if I had read it when I was younger. My favourite part of the book was the adorable sibling relationships. Even when Saffy found out about her past, the family still stuck together. I felt sorry for the mother, who had the difficult task of looking after four children practically on her own. The father frustrated me a little bit. I found him to be quite selfish!

The only reason why I haven’t rated this book any higher is because I don’t feel compelled to read the next one. I mean, I would read it… but I’m not running to get a copy.

Next up in the Beth and Chrissi do Kid-Lit challenge (October):
Black Hearts in Battersea- Joan Aiken