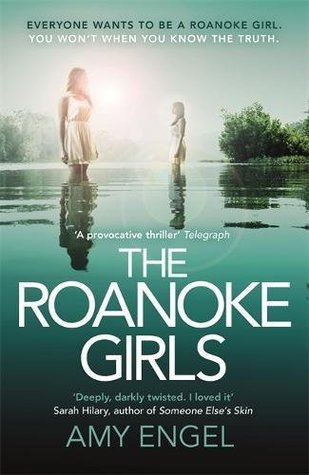 Vowing to discover the fate of her missing cousin, a woman returns to her family’s Kansas estate where she spent one haunting summer as a teen, and where she discovered the dark heart of the Roanoke clan that left her no choice but to run.

Lane Roanoke is fifteen when she comes to live with her maternal grandparents and fireball cousin, Allegra, at the Roanoke family estate in rural Osage Flats, Kansas, following the suicide of her mother. Lane knows little of her mother’s family, other than the fact that her mother ran away years before and cut off all contact with her parents. Allegra, abandoned by her own mother at birth and raised by her grandparents, introduces Lane to small-town life and the benefits of being one of the rich and beautiful Roanoke girls. But there is darkness at the heart of the Roanoke family, and when Lane discovers its insidious pull she has no choice but to run, as far and as fast as she can.

Eleven years later, Lane is scraping by in Los Angeles when her grandfather calls with the news that Allegra has gone missing. “Come home,” he beckons. Unable to resist his pleas, Lane returns to Osage Flats, determined to find her cousin and assuage her own guilt at having left Allegra behind all those years ago. Her return might mean a second chance with Cooper, the boyfriend whom she loved and destroyed that fateful summer. But it also means facing the terrible secret that made her flee, one she may not be strong enough to run from again.

As it weaves between the summer of Lane’s first arrival and the summer of her return, The Roanoke Girls shocks and tantalizes, twisting its way through revelation after mesmerizing revelation, exploring the secrets families keep and the fierce and terrible love that both binds them together and rips them apart.

CHRISSI: What did you make of Amy Engel’s first step into adult fiction?

BETH: I haven’t actually read any of her young adult fiction so I wasn’t sure what to expect from her writing. I’m really glad now that I went into this book not knowing what to expect as I think that’s definitely the way it should be read. I had heard so much buzz about it on Twitter and read some really great reviews from bloggers I love and trust so I was really excited to get stuck in. I also managed to avoid any spoilers which is fantastic as this is definitely a book that could be spoiled if a reviewer isn’t careful.

BETH: You had some quite conflicting feelings about this novel. Can you try and explain them?

CHRISSI: I can’t really articulate my feelings around this book because they’re so complex! At some points I thought it was brilliantly dark and deeply disturbing which I don’t mind in a book. I didn’t like any of the characters…again, not something that bothers me, so it can’t exactly be that. It’s incredibly hard to explain my feelings about this book in a way that doesn’t spoil it for future readers. Let’s just say, I didn’t like the way some aspects of the book weren’t challenged by the characters. I couldn’t feel empathy with them because of that. No one seemed to care or challenge issues. That frustrated me.

CHRISSI: Discuss the complex relationship between Lane and Allegra.

BETH: Lane and Allegra are cousins and when Lane’s mother dies, she comes to live at the Roanoke house with her grandfather, grandmother and cousin Allegra who has been raised there from a baby. At first, the two girls are delighted to be reunited and desperate to get to know each other, especially as they are of a similar age. It isn’t long though before tensions mount and their relationship becomes a lot more fragile which is one of the many factors that leads to Lane leaving and Allegra disappearing.

BETH: Without spoilers, did the main shock of the novel come as a big surprise to you?

CHRISSI: It didn’t. I started to guess what was going on as the story progressed. I was hoping it wasn’t going to be that way, but it was! This book is disturbing and I do feel that it should be approached with caution if you’re sensitive about some subjects that could trigger you.

CHRISSI: Discuss the small town setting of the novel and what this adds to the story.

BETH: Amy Engel captures all the quirks of a small town perfectly. Everybody knows who everybody else is and this means they also think that they’re entitled to know all their business too. There isn’t much to do in the town, purely because of the size of it and its distance from neighbouring towns so this gives some of the inhabitants, particularly our female protagonist Lane, the feeling of being too tightly enclosed and trapped. We also see when Lane returns as an adult how many things have stayed exactly the same (including people that she has left behind) and how frustrating this is for her as she fights to be free.

BETH: How do you think this book sits in the genre?

CHRISSI: I think it stands out as a book that is quite polarising. I can imagine some people will love its deep and dark subject matter. Others like me, would hope for some more sensitivity given the subject matter. It’s certainly a dark and gritty read. Don’t get me wrong, I didn’t mind reading this book and it didn’t take long to read…it’s just not something I’d personally re-read.

CHRISSI: I had a love/hate relationship with this book. How did you feel about it?

BETH: I know you had quite an interesting reading experience with The Roanoke Girls where you couldn’t quite make up your mind whether you liked it or hated it but for me I think it was a bit more black and white. I did really enjoy this novel, purely because it was so dark and twisty which was a welcome bonus – I certainly wasn’t expecting it to be as disturbing as it was! I didn’t particularly like any of the characters at all but I don’t think you have to like a character to appreciate a good story either, sometimes I feel the best novels are where you have such strong feelings of DISLIKE for a character! It also had a great little twist at the end which I kind of guessed just before the final scene but was still a fantastic end to the novel.

CHRISSI: I think I would. I didn’t hate the writing style, I found it particularly engaging! I would be interested to read the YA fiction that the author has had published!