Welcome to this month’s Banned Books post! This month we read The Agony Of Alice by Phyllis Reynolds Naylor. 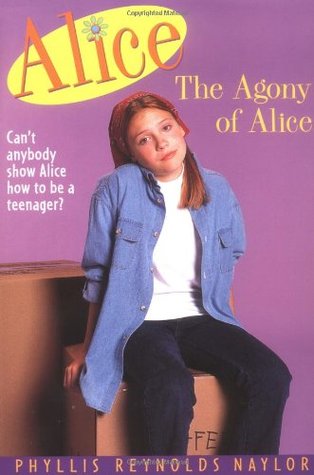 In the Top Ten most frequently challenged books in 2006 (source)

BETH: This is one of the older releases on our Banned Books list for this year (not quite as old as me but nearly there!) and comes with a fantastic vintage eighties cover that did bring a smile to my face. On reading the synopsis and seeing the front cover, I was intrigued as to why this book might be challenged/banned. I think I’ve mentioned before that I deliberately try to avoid seeing the reasons until after I’ve finished the book. Probably so that I can get even more outraged at them but that’s besides the point. I finished The Agony Of Alice at a bit of a loss to understand what problems people could have had with this story and on reading the reasons why I have to admit I’m at even more of a loss.

CHRISSI: This book is older than me! 😉 It was a really interesting one to look at, especially because it made the challenged list in 2006. I was really intrigued to see why this book could be banned. Quite often I can see why a book may have come into some trouble, but I’m completely stumped with this one. I have no idea why it was challenged. Genuinely. I didn’t find anything offensive about the language and as for sexually explicit? Pah!

BETH: This book was first published in 1985 and you might think that some attitudes have relaxed over thirty or so years? However….this book was put on the challenged/banned list in 2006, just over ten years ago so that doesn’t really make very much sense. More importantly, I see no reason at all why this book stirred up so many obviously negative feelings towards it. Offensive language? Sexuality explicit? Give me a break. This book is a story of a normal (sometimes slightly annoying) young girl on the cusp of puberty going through normal emotions and struggling with daily life without a mother figure to support her on the journey. If sexually explicit means sharing an innocent first kiss on a piece of cardboard whilst playing a game of Tarzan oh my goodness please ban every single book in the world because they are all bound to have an offensive scene like this! The only way I can get my head round this is that on the list, it says the series of Alice books has been questioned and perhaps further books in the series, as she becomes a teenager have more explicit material in them that has ruffled a few feathers? I’ll just be over here in the corner, rolling my eyes.

CHRISSI: As before, I don’t really understand. I really am at a loss. There are a lot more explicit pieces of literature out there and nothing that happens in this book would be offensive to our modern day young ‘uns. It’s about a girl who is just about to go through puberty. It’s normal. I don’t see why it was challenged. I really, really don’t. I think it’s so dangerous to challenge books such as this!

BETH:  I can’t lie, it wasn’t the best book in the world for me but I’m obviously not the target age range. I swayed backwards and forwards over Alice as a character but loved the relationships she ended up developing. It’s a quick, easy read and a good introduction to adolescence for those children teetering on the edge of being a teenager. I also enjoyed the fact that it wasn’t a conventional family set up and the author explored what it was like for Alice to be in a family without a mother.

CHRISSI: It’s an okay read, but I didn’t connect with it very much. Baring in mind, I’m not the target audience I think others might really enjoy it. Alice annoyed me a little as a character and I don’t think I’ll be continuing her story, but many others will and have done!

Thank you so much to everyone who has read and enjoyed our Banned Books posts in 2017, we’ve really enjoyed doing them. Join us again on January 1st 2018 when we’ll be revealing our Banned Books list for 2018! Merry Christmas and a Happy New Year to you all.