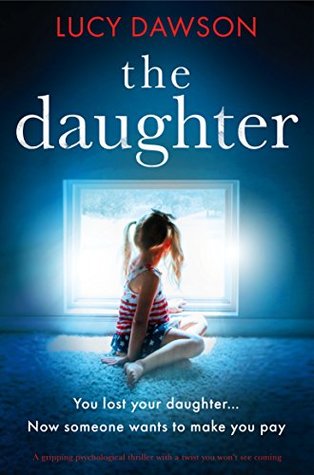 How did I get it?:
NetGalley- thanks to Bookouture

You lost your daughter. You will never forgive yourself. And now someone’s determined to make you pay…

Seventeen years ago, something happened to Jess’s daughter Beth. The memory of it still makes her blood run cold. Jess has tried everything to make peace with that day, and the part she played in what happened. It was only a brief moment of desire… but she’ll pay for it with a lifetime of guilt.

To distance herself from the mistakes of the past, Jess has moved away and started over with her family. But when terrifying things begin happening in her new home, seemingly connected to what happened to Beth, Jess knows that her past has finally caught up with her. Somebody feels Jess hasn’t paid enough, and is determined to make her suffer for the secrets she’s kept all these years.

I was immediately intrigued by the synopsis of this book. I’m very into my thrillers which you’ll know if you’re a regular reader of my blog.

The Daughter starts with something awful happening to Jess’s daughter Beth. Seventeen years later, Jess is trying to move on and make peace with the past and the part she played. However, no-one can get over such a tragic event, especially when there’s guilt there. Jess has moved away and started over with her family. When looking to move into a new home, years later, terrifying things start to happen to Jess which seem to be connected to Beth. Someone seems determined to make Jess pay…

This book immediately gripped me when it started with the incident at school. I’m pretty sure it’s a common fear in parents…a call to say your child has been rushed to hospital. Terrifying. Even as a devoted Auntie, I would be so anxious to take that call. Immediately, the author humanises our main character Jess. I sympathised with her. Beth’s funeral was an incredibly hard moment to read about. It was then I realised that Lucy Dawson had completely captured my attention.

I loved this book because it contained so many secrets and lies. Secrets and lies always catch up eventually and it was a matter of when they were going to catch up with the characters. It’s such a fast paced plot and it’s so easy to just keep turning the pages and reading.

Jess isn’t an easy character to understand at times. She makes some horrific decisions but I could always see why she had made the decisions she did. She wasn’t always likeable, but she was understandable.  Some of the other characters were simply fascinating as well. I loved watching their stories unravel. This really is a fantastic psychological thriller, but one that’ll tug at your heart strings.

This was quite an emotional read! I thoroughly enjoyed this thriller!

6 thoughts on “The Daughter”