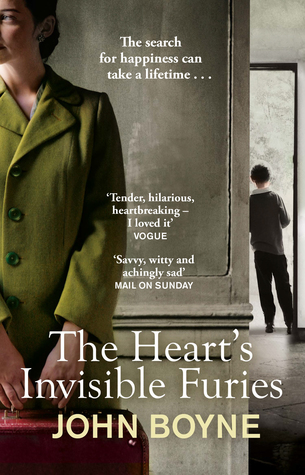 Cyril Avery is not a real Avery or at least that’s what his adoptive parents tell him. And he never will be. But if he isn’t a real Avery, then who is he?

Born out of wedlock to a teenage girl cast out from her rural Irish community and adopted by a well-to-do if eccentric Dublin couple via the intervention of a hunchbacked Redemptorist nun, Cyril is adrift in the world, anchored only tenuously by his heartfelt friendship with the infinitely more glamourous and dangerous Julian Woodbead.

At the mercy of fortune and coincidence, he will spend a lifetime coming to know himself and where he came from – and over his three score years and ten, will struggle to discover an identity, a home, a country and much more.

CHRISSI: This book has been very hyped by others in the blogosphere. Did the hype worry you? We all know about that dreaded hype monster…

BETH: I think we all worry about that horrible hype monster. There’s been so often where I’ve heard nothing but good things about a book and for some reason, I just haven’t connected with it as much as other readers. But for some strange reason, I didn’t have that worry with this book. I’m not sure if it’s because I’ve read a few of John Boyne’s books now so I’m already familiar with his style of writing (and I was pretty certain I was going to love it!) or if I’ve read enough reviews of it now that I knew I’d be into it purely on the plot alone. This was definitely the case with me, I knew I was going to love it, what WAS unexpected was just how much I would adore it.

BETH: What did you make of the relationship between Cyril and his adoptive parents, Charles and Maude?

CHRISSI: SO VERY STRANGE. I really felt for Cyril. I felt like Cyril’s adoptive parents merely adopted him just because it was ‘right’ thing to do, to have a child. I don’t feel like there was much love there which was a great shame. Charles and his constant need to remind Cyril that he wasn’t a real Avery. Ooh his Dad really made me cross. Ha! I find it funny that I’m still so annoyed about Cyril’s parents!

CHRISSI: Following Cyril through the course of his life takes us through much of the twentieth century. How was each decade most vividly brought to life for you?

BETH: Great question. We see Cyril from a very young boy, right through school and teenage years to a young adult, middle aged man and then an old man. Different things happen to him in each decade that affect his life irrevocably and it seems each decade also comes with a different challenge for poor Cyril. I think his life was brought into vivid detail by these experiences that he goes through and also the host of colourful characters that he meets along the way that all touch his life in some way, either for better or for worst.

BETH: How well do you think this novel explored what it’s like to be gay in Ireland from the fifties onwards?

CHRISSI: I found this novel to be incredibly intriguing as to what it was like to be gay in Ireland from the 50s. I guess I always knew in the back of my mind about what Ireland experienced, but I don’t think I’ve ever read something so memorable about Ireland’s history with homosexuality. I think the novel explored it well and in a way that was heart-breaking but incredibly memorable at the same time.

CHRISSI: Discuss the ending, how else might you have concluded Cyril’s story?

BETH: The ending was quite bitter-sweet for me but I’ll try not to give away any spoilers. I’m really happy we got to see Cyril as a seventy year old man coming near the end of his life. However, this was also really sad (and sounds a bit silly) but even though I’m aware he’s fictional, I just wish he hadn’t aged so quickly! By the end of the novel, he seems to have achieved some sort of closure about the events that have happened to him over the years and has made peace with those he needed to which was lovely to read. Some of the parts really broke my heart though, especially when you find out his future and when he’s talking to his nearest and dearest that he hasn’t seen for years.

BETH: There is a large cast of very different characters in this novel. Which character did you most warm to and why?

CHRISSI: There really is a large cast of characters. However, only one stole my heart and that was Cyril. I absolutely loved following his story across his life. I loved seeing him grow over time from teen, to young adult, adult to the elderly Cyril. I loved being along for the ride. I grew so close to Cyril and was desperate for everything to turn out right for him.

CHRISSI: How do you think this book compares to John Boyne’s other books that you’ve read?

BETH: I’ve read probably his most famous – The Boy In The Striped Pyjamas, Mutiny On The Bounty and Stay Where You Are And Then Leave. Although I rated the latter of these five stars on Goodreads, I would have to say without a doubt, The Heart’s Invisible Furies is my favourite book by John Boyne so far. It has the most beautiful writing, the most fantastic characters and was a novel that had me laughing and crying in equal measure. It’s easily made it’s way to my favourites shelf and is probably one of my all-time favourite books that I’ll be talking about and pushing into other people’s hands for a long time yet.

BETH: The Heart’s Invisible Furies is both funny and sad. Why do you think the author chose to use humour in the telling of this story?

CHRISSI: I think it’s really important that stories have a balance of funny and sad. Despite bad things happening, life does have its funny moments. I think if stories always dwell on the sad then it can be very tough to read. I like it when there are lighter moments in this story. I think the author included some lighter moments because some particular moments were difficult to read.

BETH: Without a doubt!