Welcome to this month’s edition of Banned Books. This month we read Fallen Angels by Walter Dean Myers. 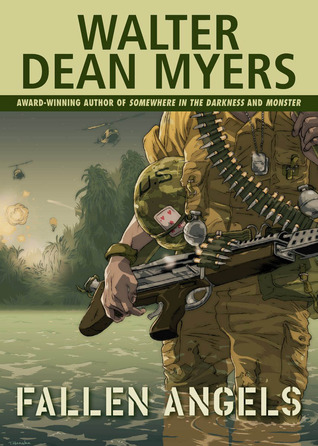 In the Top Ten most frequently challenged books in 2001 (source)

BETH: I’ve mentioned before how I like to go into our banned books completely blind about what the reason for challenging/banning it were and I always like to try and guess why people might not have deemed it appropriate. Well, when I looked at the reason for Fallen Angels being banned in 2001 (still can’t believe that was 17 years ago!!) I had to rub my eyes and look again to see if they’d missed anything. Yup, just offensive language. I have to admit, yes there was a tiny little bit of bad language in this book. It didn’t offend me however and it seemed realistic given the traumatic circumstances that the soldiers found themselves in at times. I’m going to draw from personal experience now and tell you about this lovely older lady I used to work with. Instead of swearing, she would substitute the word for a plant beginning with the same letter. For example, I’ll use the relatively tame: “Damn!” Instead of “Damn!,” she used to say, “Dandelions!” It used to make me smile, bless her heart. Anyway (and there is a point to this little tale) I can’t really imagine very young soldiers i.e. seventeen/eighteen year old getting in a horrific mess and saying “Oh, Fuschia!” or “Buttercup!!”It felt real to me anyway and the utterances of “bad words,” was so few and far between that to be honest, I barely noticed it. I don’t personally make a habit of swearing on my blog, I know that some people would be offended by it and I would hate to offend anyone but I really do think teenagers/children hear worse things out on the streets/at school/on television than anything written in this book.

CHRISSI: Like Beth, I don’t really read up on the reasons why a book has been challenged. I just read it for myself and then try and work out if I knew why it was challenged. I did think the reason this book was challenged was because of the violence and racism casually littered into the story. Offensive language? Teenagers (and unfortunately younger children) hear much worse in their family homes/media/from their peers/music!

BETH: As there’s only one reason why this book was challenged/banned, I want to just touch on reasons that I was surprised didn’t come up. We’ve been doing this Banned Books feature for a little while now and a lot of times, the theme of violence, overt sexuality or racism comes up as a reason for the book being thought inappropriate (by some!). Now there was less sexuality (although quite a bit of homophobia) but there was quite a lot of casual racism in Fallen Angels and definitely A LOT of violence. I mean, it’s set around a group of young soldiers in the Vietnam War so if you were expecting anything different, you’d be sorely wrong. As this book was mostly war and soldiers getting injured/dying, I have to say I was really surprised that this didn’t come up as a reason for challenging it? Not that I’m complaining, I don’t agree with banning any books of course, but if you were going to choose a reason…..CONFUSED.

CHRISSI: I’m confused too. I really didn’t think the swearing was that bad. I’ve read a lot worse language in some books. Of course, this book was about soldiers in Vietnam so there was bound to be violence, but I thought that was going to be the reasoning behind it. I’m genuinely baffled as to why the subject matter wasn’t questioned. If you’re going to challenge a book, challenge it for something more substantial than language. Pfft.

BETH: Unfortunately, I didn’t get on with this book too well. Some of the scenes are incredibly powerful, especially when Perry and his friends are in the midst of fighting and generally, I find war horrifying anyway so it was always going to be quite an emotive read. However, I just felt like I wanted a bit more character development. I didn’t feel like we got to know any of the boys as well as we could have done if they weren’t fighting all the time. Yes, I get that it was meant to be about the Vietnam War and their traumatic experience of going to war so young but I just feel more could have been made of their characters.

CHRISSI: I was not a fan. Despite there being a war going on, I didn’t feel like much happened in the story. I don’t feel like I got to know any of the characters. I found myself skim reading it which isn’t a sign of a wonderful book…I do know that others would enjoy it. It just didn’t work well for me.