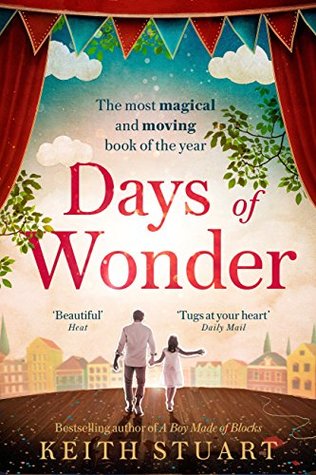 How did I get it?:
NetGalley thanks to Little, Brown Book Group

Previously reviewed by the same author:
A Boy Made Of Blocks

Tom, single father to Hannah, is the manager of a tiny local theatre. On the same day each year, he and its colourful cast of part-time actors have staged a fantastical production just for his little girl, a moment of magic to make her childhood unforgettable.

But there is another reason behind these annual shows: the very first production followed Hannah’s diagnosis with a heart condition that will end her life early. And now, with Hannah a funny, tough girl of fifteen, that time is coming.

Hannah’s heart is literally broken – and she can’t bear the idea of her dad’s breaking too. So she resolves to find a partner for Tom, someone else to love, to fill the space beside him.

While all the time Tom plans a final day of magic that might just save them both.

I was a massive fan of Keith Stuart’s debut novel A Boy Made Of Blocks. I thought it was absolutely sensational, so when I noticed his second novel up for grabs on NetGalley, I just had to go for it. I really enjoy Keith Stuart’s writing. He’s clearly a very talented writer because Days Of Wonder is another brilliant novel. It’s emotional and heart-warming at the same time. Days Of Wonder is narrated by Tom and his daughter Hannah. They take alternate chapters. I absolutely loved this narration!

Tom is a single father devoted to his daughter Hannah and his job as theatre manager. Hannah was diagnosed with a serious heart condition when she was younger. She’s now fifteen and mature beyond her young years. The story starts after Hannah’s diagnosis at five. For her fifth birthday, an amateur dramatic group put on a fairy tale for her outside her window. This leads to a tradition of a fairy tale for every birthday that follows. Days of Wonder follows Tom and Hannah through tough times. Hannah’s desperate for her father to have someone by his side when she leaves him. 😦 It’s heart-breaking!

Keith Stuart really has a way of making me feel for the characters. I immediately adored Tom and Hannah, however, there are so many other brilliant characters in this story. There was an older lady named Margaret who Hannah was very close to. I loved her anecdotes and how she would talk to Hannah about anything… including death. Hannah’s friends were lovable as well. They were always there for her. Hannah is a very special girl, she realises that her life is so fragile and doesn’t want to plan for the future, instead she puts her energy into ensuring her father is looked out for. I loved how she was desperate for her father to be happy.

I knew this book was going to be emotional, but I didn’t expect to be as invested in the story as I was. I loved seeing Hannah grow as a character and her father grew too. He learnt to be less overprotective despite his child’s life being so fragile. It may seem like a really depressing story, but I think its sweetness and the way it really makes you feel grateful for everything that you have really makes the book reach new heights.

A beautiful book that both breaks and warms your heart!

6 thoughts on “Days Of Wonder”