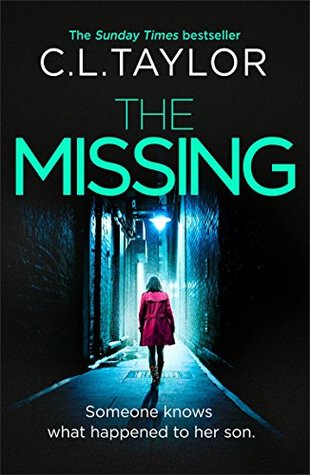 Previously reviewed by the same author:
The Treatment
The Accident
The Lie

You love your family. They make you feel safe. You trust them. Or do you…?

When fifteen-year-old Billy Wilkinson goes missing in the middle of the night, his mother, Claire Wilkinson, blames herself. She’s not the only one. There isn’t a single member of Billy’s family that doesn’t feel guilty. But the Wilkinson’s are so used to keeping secrets from one another that it isn’t until six months later, after an appeal for information goes horribly wrong, that the truth begins to surface.

Claire is sure of two things – that Billy is still alive and that her friends and family had nothing to do with his disappearance.

A mother’s instinct is never wrong. Or is it?

With The Missing, I continue my delve into C.L Taylor’s backlist. I’ve been gradually making my way through her books and certainly enjoying my journey into her writing. I’ve found her to be absolutely brilliant at creating some fascinating characters. Not always one you’ll like. Oh no. But completely fascinating all the same.

In The Missing we find out that 15 year old Billy has gone missing. No one seen him leave and six months later they are still searching for him. It’s come to the point where they’re starting to question whether Billy is still alive. We learn about Billy through the family that he’s left behind. We mainly learn through Claire, but we also get a glimpse of Mark, the father and Jake his older brother. They are all struggling to come to terms with Billy’s disappearance. We also get to know Jake’s girlfriend Kira, who is living with the family after experiencing terrible things in her own family. Each character is hiding something and you really don’t know who to trust as a reader. Claire begins to have amnesic episodes that make you question her reliability as a narrator.

As well as Claire’s narration, we also see messages between two characters on an instant messenger/text message format. These were quite intense and some were quite disturbing with some strong language (so be prepared if you’re offended by that!) I guessed one of the characters but I was completely wrong about another. I had assumed something (don’t want to spoil!) that was completely off the mark. Ha!

The Missing is fast paced and a page turner despite it being nearly 500 pages long. I never felt like it was too long. I just kept turning the pages eager to find out what was going on. It may not be my favourite book by her, but I have really enjoyed C.L Taylor’s plots so far. They’re not always predictable which I really appreciate. All too often, these books are quite similar so you can predict where it’s going. I love it when I’m completely wrong! I am certainly looking forward to reading more from this author, soon! 🙂

8 thoughts on “The Missing”