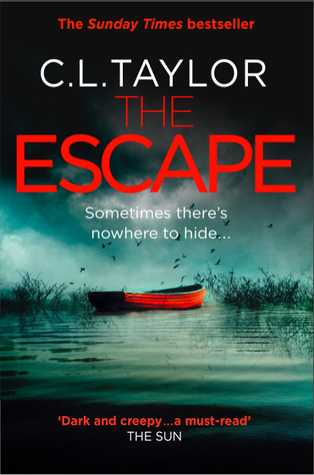 Previously reviewed by the same author:
The Treatment
The Accident
The Lie
The Missing

When a stranger asks Jo Blackmore for a lift she says yes, then swiftly wishes she hadn’t.

The stranger knows Jo’s name, she knows her husband Max and she’s got a glove belonging to Jo’s two year old daughter Elise.

What begins with a subtle threat swiftly turns into a nightmare as the police, social services and even Jo’s own husband turn against her.

No one believes that Elise is in danger. But Jo knows there’s only one way to keep her child safe – RUN.

I’ve come to realise that C.L Taylor’s books are dramatic and can sometimes a little unbelievable but do you know something? I’m totally okay with that. This is the fifth book I’ve read by C.L Taylor and I can confirm that I’m quite a fan of her writing!

The Escape centres around who has been suffering from agoraphobia for many years. However, Jo has learn strategies to cope with her agoraphobia. She’s able to work as long as she keeps to the rules she has set for herself. Unfortunately, one day Jo loosens the rules by giving a lift to a woman she doesn’t know. The woman’s name is Paula and she gives Jo very little chance to refuse. She has one of Elise’s mittens and gives her a very unsettling warning about looking after her daughter. It turns out that Paula knows her, her husband and her daughter. Jo’s worries heighten as you can imagine and this begins the tension. Jo ends up going to Ireland to lie low, but the trouble just follows her…

Jo isn’t the easiest character to like. I don’t know what it was about her really, but I was desperate for her to have a little more fight in her. However, I still found myself wanting things to turn out well for her. I found her husband a little infuriating too, but this didn’t affect my enjoyment of the story. There’s something about this author’s writing that I find totally compelling.

C.L Taylor sure has a way of keeping you turning the pages. Her characters are well fleshed out and totally believable, even if sometimes the situations may seem a little exaggerated- it still seems like these could be real people!

I may not have thought much of these characters, but the story kept me turning the pages!

12 thoughts on “The Escape”