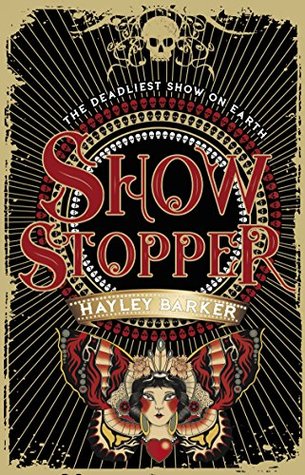 Set in a near-future England where the poorest people in the land must watch their children be taken by a travelling circus – to perform at the mercy of hungry lions, sabotaged high wires and a demonic ringmaster. The ruling class visit the circus as an escape from their structured, high-achieving lives – pure entertainment with a bloodthirsty edge. Ben, the teenage son of a draconian government minister, visits the circus for the first time and falls instantly in love with Hoshiko, a young performer. They come from harshly different worlds – but must join together to escape the circus and put an end to its brutal sport.

I was invited to read the second book in this series, I agreed before I realised it was a series! I knew then that I had to read the first one. I was hoping to really like it so my commitment to review the second book wasn’t such a chore. Luckily for me, I really did enjoy Show Stopper. It’s an incredibly dark YA novel. I think it may cause contention with some because it’s very much about those ‘pure of blood’ being separated from those that are more diverse. They are treated awfully because they’re not ‘pure.’ I can see this grating on a few readers, but sadly I don’t think it’s a far fetched notion. It doesn’t make it right, but it’s definitely something to think about.

Show Stopper is set in future England. The poorest people have to give up their children to the circus to perform in front of hungry animals, high wires and an absolutely awful ringmaster. Those that are pure of blood often visit the circus as an escape from their busy lives. They are entertained and blood-thirsty, eager to see if the poor get hurt or even killed. Ben, the son of a government minister responsible for weeding out the poorer class, visits the circus one evening and becomes captivated by Hoshiko. They both come from completely different worlds, but must work together in order to escape the circus.

It is narrated by both Ben and Hoshiko. I never had a problem following the narrative. It was clear to me which one of the characters were narrating. I thought Show Stopper was such a fast paced read. I think the short chapters definitely helped this. I quickly raced through the book, eager to find out what was going to happen. There are some brilliant characters within these pages. The Ringmaster is awful, yet I thought he was great to hate.

I can understand why this book sits uncomfortably with many readers as some of the issues discussed are relevant to the issues we face in our society. However, there’s something about this book that totally engrossed me and kept me reading until the end and eager to pick up the next book!

I thought this was an amazing book. I’m really into the circus vibe at the moment and this story was utterly engrossing!

Look out for my review of Show Stealer later in the month!