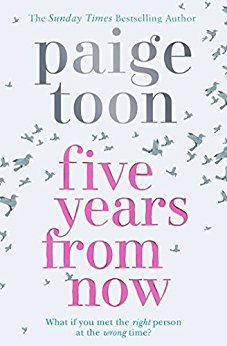 Nell and Van meet as children when their parents fall in love, but soon they are forced worlds apart.

Five years later, they find each other.  Their bond is rekindled and new feelings take hold, but once again they must separate.

For the next two decades, fate brings Nell and Van together every five years, as life and circumstance continue to divide them. Will they ever find true happiness? And will it be together?

‘One day, maybe five years from now, you’ll look back and understand why this happened…’

As you might see from my previously reviewed by the same author section, I’m quite the fan of Paige Toon. I love her books because they’re not your typical chick-lit. There’s usually quite some depth involved within the story and that’s something that I really appreciate. Paige’s recent release did not let me down!

Five Years From Now centres around Nell and Vian. Their birthdays are two days apart. They first meet at 5 years old when family circumstances bring them together. After some resistance at first, they really start to get on with one another. Their friendship is so pure and beautiful to read about. Later on, at the age of 10 Nell and Vian get separated from one another. They end up living on opposite sides of the world, but still keeping contact with one another. Eventually they begin to develop feelings for one another, but their lives take different turns along the way. Through the story, we meet them every five years and see what has happened in their lives.

Something I really love about Paige Toon is that she doesn’t give her characters an easy ride. Both Nell and Vian have major things happening to them. It certainly isn’t an easy ride for them. I like the idea of the future helping you to reflect on the past. It is true, sometimes moments feel huge in the present moment but with some moments, your past can make sense years on.

The ending was not what I wanted, but I really do think it took some guts to write it the way that Paige did. I don’t want to spoil what happened, but if you have read this book, I’d be really intrigued to know if you liked the ending?

This book solidifies why I enjoy Paige Toon’s writing so much. It’s much more than your average chick-lit so please don’t be put off by the cover!

Another wonderful read from Paige Toon. I love her books!

4 thoughts on “Five Years From Now”