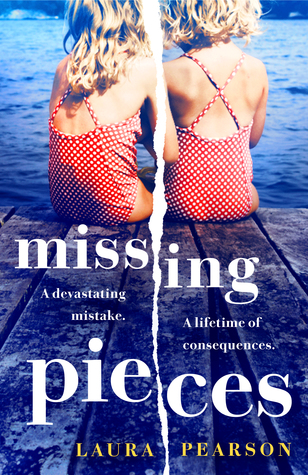 What if the one thing that kept you together was breaking you apart?

All Linda wants to do is sleep. She won’t look at her husband. She can’t stand her daughter. And she doesn’t want to have this baby. Having this baby means moving on, and she just wants to go back to before. Before their family was torn apart, before the blame was placed.

Alienated by their own guilt and struggling to cope, the Sadler family unravels. They grow up, grow apart, never talking about their terrible secret.

That is until Linda’s daughter finds out she’s pregnant. Before she brings another Sadler into the world, Bea needs to know what happened twenty-five years ago. What did they keep from her? What happened that couldn’t be fixed?

I had heard fabulous things Missing Pieces so I was super excited to read it in-between my commitments with my blogger sister, Bibliobeth this month. It’s a short book at under 300 pages, but each moment was jam packed, yet it never felt too much. I am so impressed that this book is Laura Pearson’s debut, I think she is a very promising writer!

Missing Pieces is a story about a family that used to be super happy, until the loss of their youngest child. It only took a short time for the tragedy to occur. An elderly neighbour needed help, so the two children were left alone for a short time. In that time, the youngest child died and Sadler’s families lives turned absolutely upside down.

Understandably, the guilt and the grief affects everyone in different ways. Linda blames her daughter for not looking after her sister properly. Linda’s youngest daughter Phoebe, was clearly her favourite. She can’t look at her husband as he should have been home. With the discovery that Linda is pregnant, she really doesn’t want another child. She wants Phoebe back. Terrible events occur which I don’t want to spoil. It’s one you really don’t want to know about before reading the book, but trust me it is highly emotional.

The second part of the story is centred around when the new baby is grown up. She’s named Bea and is pregnant herself. Bea wants to know exactly what happened to the sister she never knew. What is being kept from her?

I really did think this was an incredible story. It was emotional, but wonderful at the same time. It centres around how it can take a long time for you to forgive yourself and for some they never can. It’s about love, forgiveness, family and learning to move on despite events in the past.

I thought this was a fantastic debut novel. I look forward to what Laura Pearson writes next!