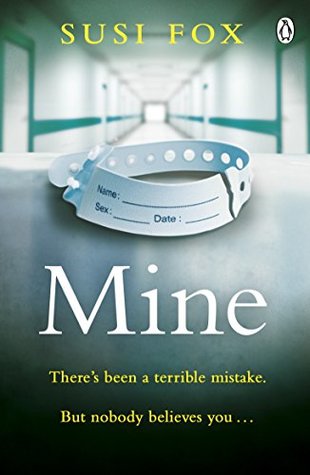 This is not your baby.

You wake up alone after an emergency caesarean, dying to see your child.

But when you are shown the infant, you just know . . .

This baby is not yours.

No one believes you.

Do you trust yourself?

Because you know only one thing – You must find your baby.

I had heard many good things about Mine so I was super excited to check it out. I’m trying to get through books on my kindle as I just keep buying them and not getting around to reading them. #bookwormstruggles I thought that Mine was an incredibly easy to read book. I was eager to find out what was going to happen right from the start. Goodness knows that cover gives an amazing tag line!

The story centres around Sasha who wakes up in hospital after a caesarean. Sasha doesn’t remember much about the birth but she knows she is desperate to see her baby. Sasha and her husband were so desperate to have a baby so she wants to savour every minute with her newborn. However, when she gets to the hospital nursery, she is convinced that the baby she is shown is not hers. No-one listens to Sasha- even her husband is sure that she’s wrong. Sasha is determined to convince them that a mistake has been made…but how will she get everyone to believe her?

Mine really did have me gripped from the start. It has an interesting pace that is somewhat ramped up at the start and at the end, with the middle moving much more slowly. It’s a highly emotional story which some might find hard to read if you’ve suffered from mental health or fertility issues. I really didn’t know who to believe. I went through stages of thinking that Sasha was a really unreliable narrator and then I changed my mind again. It really was a rollercoaster that made you question whether Sasha was mentally stable or not.

I really enjoyed the time frame of this story. It goes over a week and flips between the past and the present. I don’t always enjoy that narrative, but Susi Fox certainly wrote the narrative well. It was interesting to find out that Susi Fox is a medical professional, I felt like the medical scenes were very realistic. It was clear that Susi was well informed.

The characters in Mine are fantastic. I really felt for Sasha. I immediately wanted everything to be sorted out for her- whether she was right or not. I found Sasha’s husband, Mark, to be a little frustrating. I wanted him to be there more for his wife. However, I did feel some sympathy for him when I read about this past as the reader does find out about some of his family history.

I was really impressed with this debut novel and the only thing that prevented me from giving it four stars, was that I particularly enjoy a consistently paced plot and I didn’t feel like this was. It’s a tiny complaint though. Overall, I thought it was a very promising, well informed, well written debut novel.

A solid debut from Susi Fox. I think that this book would be a great book club read!