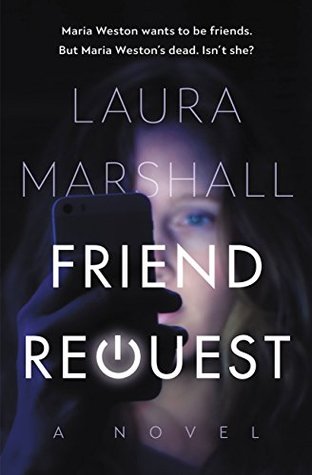 1989. When Louise first notices the new girl who has mysteriously transferred late into their senior year, Maria seems to be everything the girls Louise hangs out with aren’t. Authentic. Funny. Brash. Within just a few days, Maria and Louise are on their way to becoming fast friends.

2016. Louise receives a heart-stopping email: Maria Weston wants to be friends on Facebook. Long-buried memories quickly rise to the surface: those first days of their budding friendship; cruel decisions made and dark secrets kept; the night that would change all their lives forever.

Louise has always known that if the truth ever came out, she could stand to lose everything. Her job. Her son. Her freedom. Maria’s sudden reappearance threatens it all, and forces Louise to reconnect with everyone she’d severed ties with to escape the past. But as she tries to piece together exactly what happened that night, Louise discovers there’s more to the story than she ever knew. To keep her secret, Louise must first uncover the whole truth, before what’s known to Maria–or whoever’s pretending to be her–is known to all.

I had heard really good things about this book, so was looking forward to checking it out. I put it on my Winter TBR and made it my mission to get to it. I really enjoyed this thriller and thought it was a great debut. I would definitely put this author on my radar to read more from in the future.

Friend Request centres around Louise who is a divorced mother. She lives with her son and has her own business. Everything seems to be going okay in her life until she gets a friend request from an old school friend Maria. The only trouble is…Maria has been dead for many years. The story flips between the past and the present. It becomes quite the mystery when the friend request comes at the same time as a school reunion. Louise is ashamed of her past, of when she used to do things to fit in with the popular kids and keep her friendship with Queen Bee Sophie. Those things included the bullying of Maria.

I really enjoy books that incorporate social media. It’s so current and so now. It also can be incredibly toxic and fascinating to read about. I’m just pleased Facebook and Twitter weren’t overly popularly when I was at school. It’s scary how much I have to teach about the dangers of social media in primary school now, because children are getting onto social media earlier than they should be. Terrifying.

I loved this plot because it’s something that so many people can relate to. I’m pretty sure many of us have done things that we regret when we were school age. Even if it’s not as intense as Louise and her friends. There are many interesting relationships to delve into. The pace of this story is quite fast. There are some plot twists along the way that definitely keep you interested. I didn’t really enjoy the ending which was a shame and that’s the reason I haven’t rated this book 4 stars.

A gripping read and a very promising debut novel from Laura Marshall!