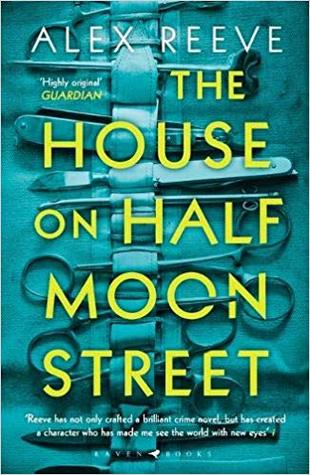 Everyone has a secret… Only some lead to murder.

Leo Stanhope. Assistant to a London coroner; in love with Maria; and hiding a very big secret.

For Leo was born Charlotte, but knowing he was meant to be a man – despite the evidence of his body – he fled his family home at just fifteen, and has been living as Leo ever since: his original identity known only to a few trusted people.

But then Maria is found dead and Leo is accused of her murder. Desperate to find her killer and under suspicion from all those around him, he stands to lose not just the woman he loves, but his freedom and, ultimately, his life.

CHRISSI: I told you when I started reading this book that it wasn’t what I had expected. Did you have any preconceptions of this book? Did it live up to your expectations?

BETH: I know you weren’t super keen on this one when we originally looked at it and to be honest, I wasn’t sure what to expect myself. I’m desperately trying to step away from judging books too much before I give them a chance so I went into it with an open and intrigued mind. Also, even though I usually read the synopsis before I get stuck in, I tried to go into this book a little blind so that I could find out all about it myself without making any pre-judgements. In the end, I’m glad I did this as it made the story and the character of Leo more exciting for me and I was curious to see how it would continue.

BETH: What do you think you anticipated from this novel? How did your opinion change as you began and then finished it?

CHRISSI: I was NOT keen at all on reading this book. I did a you (hee hee) and judged it by its cover and the crime genre. I’m not a massive fan of the genre because it doesn’t always capture my attention. I personally feel that the genre is overpopulated and there are so many similar books. However, my opinion completely changed. I was pleasantly surprised and I feel like Alex Reeve brought something new to the genre.

CHRISSI: We’ve read books set in Victorian London before. How do you think the setting is compared to other books set in the same era?

BETH: I think the setting was definitely very evocative. Victorian London is one of my favourite settings to read about and I especially enjoy crime set in this era. However, because a lot of different works of fiction have been set within this time period, there is always a chance it can feel a bit stale. Luckily, I don’t believe this is the case with Half Moon Street. The author drops you expertly into the Victorian era with a lot of vivid descriptions of the streets and the people that walked them at this time in history. It took me right back in time, like I wanted and sits perfectly alongside other books set in this period.

BETH: Who was your favourite supporting character and why?

CHRISSI: I’m not sure it’s a ‘favourite’ as such but I was intrigued by Rosie Flowers. Yes, that really was her name. I wanted to know whether I could trust her or not and I was very interested in her history. It’s hard to pick a favourite as the characters are incredibly well rounded and developed. I think I could have easily picked a few. Maria herself intrigued me throughout, even though she had died (not a spoiler) early on in the story!

CHRISSI: Did this book capture your attention all the way through? What was it about the story that kept you reading?

BETH: I can say with complete confidence that my reason for turning the pages was most definitely the character of Leo. From the very beginning, you understand what an extraordinarily difficult life he has had and this could have made a story all of its own. When a murder is thrown into the mixture, Leo (turned amateur detective) becomes an even more endearing character who you find yourself rooting for constantly.

BETH: How do you think the author manages to capture the dark side of Victorian London?

CHRISSI: I felt like Alex Reeve really captured the dark side of Victorian London well. I definitely felt the atmosphere that I can imagine was around Victorian London. There were many elements that portrayed Victorian London effectively. The prostitution, the murders, the gore (especially the talk of the innards at the start!) the role of the men and women. It was all there in all it’s glory gory. It really struck a chord with me, that Leo knew he’d be put in an asylum if it was found that he dressed as a man.

CHRISSI: Without spoilers, what did you make of the ending? Can you see this becoming a long series?

BETH: I liked the ending! I thought I had it all figured out but not quite. Things are resolved to an extent but the reader is definitely left hanging in one respect as to what might happen next (generally speaking) in the life of our main character, Leo. It absolutely has the potential to run as quite a long series because of the strength of Leo’s character and the potential adventures that he could become embroiled in.

CHRISSI: I would. As long as the series doesn’t go on for too long. I think it’s my problem with some crime fiction. It seems to go on for many books and my interest wanes. A trilogy is enough for my attention span! 😉

Would WE recommend it?

4 thoughts on “Talking About ‘The House On Half Moon Street’ with Bibliobeth!”