Welcome to this month’s edition of Banned Books. This month we read Uncle Bobby’s Wedding by Sarah S. Brannen. 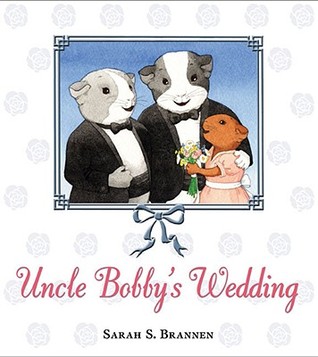 In the Top Ten most frequently challenged books in 2008 (source)

BETH: No, no and no some more. I get so wound up when a book as sweet and inoffensive like this is challenged on grounds of homosexuality. I don’t understand it that as recently as ten years ago (which still feels to me like yesterday!) that individuals were challenging books for children because it featured gay characters. I think I would understand (but definitely NOT accept) the challenging if it was in less enlightened times when homosexuality was illegal and a lot of people had a problem with it. But to use it as a reason to restrict access to a book in the 2000’s. Really?

CHRISSI: What Beth said. I actually find it offensive that this book was even challenged! It is such a sweet story and it’s told in such a gentle way. What message does it send young children if a book like this is challenged/banned? That’s it wrong to have a homosexual in your family? Argh, it makes me so cross. I know a lot of children who do have two mothers and my heart hurts to think that they would believe it’s ‘wrong’. Children should see a representation of every type of family to open their minds and address stereotypes.

BETH: I think you can already see from my previous answer that I very much disagree. Since 2008, I would have loved to believe we are becoming more accepting of individuals beliefs and desires but sadly, although I think there has been a lot of progress, there is still a lot more work to do. There will always be people who have quite extreme ideas about what is right and what is wrong and they’re entitled to their own opinion but when they use it to try and change other people’s minds/hurt the target individuals that they have a problem with, that’s when I have a problem too.

CHRISSI: I think there’s so much work to be done. Children are so much more accepting than adults and I wonder when that acceptance starts to get lost, or why it gets lost. When is it that we begin to judge so much? I know children don’t. When I get asked why a certain person has two mothers/fathers in class, the children accept it without questioning. Books like this NEED to be about so children know that it’s not abnormal to have a different family set up.

BETH: I found this book to be a very adorable and informative read, especially for younger children. It’s a fantastic way of introducing children to LGBT issues and the fact that people should be free to love/marry whomever they want. I would be happy to read it with any children I come across and would be delighted to see it in schools, available for children to enjoy.

CHRISSI: It’s adorable and I’d be happy to read it to any child in my school!