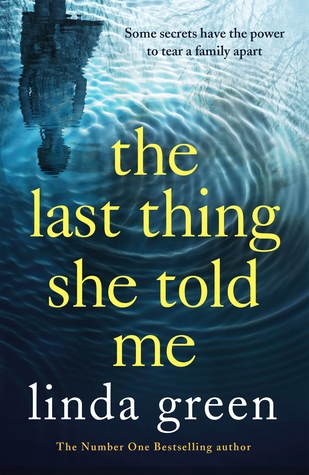 Moments before she dies, Nicola’s grandmother Betty whispers to her that there are babies at the bottom of the garden.

Nicola’s mother claims she was talking nonsense. However, when Nicola’s daughter finds a bone while playing in Betty’s garden, it’s clear that something sinister has taken place.

CHRISSI: Did you ever feel like this book was too far-fetched?

BETH: This might not be the same answer for everyone who reads it but unfortunately for me at points, I found it difficult to connect with. Not necessarily unbelievable but there were points when I thought the way certain characters reacted to circumstances weren’t how I imagined they would in a real-life situation. However, I don’t have any personal experience similar enough to what some of the women suffer through in this book so who can say for certain how someone would/should react? I have plenty of experience with grief and it certainly does crazy things to a person, emotionally and psychologically speaking. Also, the part with the fairy bone and Maisie being allowed to keep it for a night according to the police – I really don’t think that would actually happen.

BETH: What did you think of the relationship between the women, primarily Nicola and her mother Irene? Did you find any similarities between Nicola’s relationship to her oldest daughter, Ruby?

CHRISSI: I felt like the relationships between women in this story were quite fractured. Nicola and Irene definitely had a difficult time within this story, mainly down to what had happened to Irene in the past. Nicola may not have realised this. I feel like Nicola tried to be more open and honest with her own daughter although she hid a major secret from her. There were so many secrets in this story that affected all of the female relationships.

CHRISSI: What purpose did William’s letters to Betty serve throughout the book?

BETH: I thought they served as a nice little addition to the narrative. I really enjoy the inclusion of letters in a novel, it gives such a fascinating insight into a character’s life and personality but the danger with them is that if you’re only hearing from one person’s point of view, it gives only one side of the story. With the different threads going on throughout this book, I couldn’t help but be slightly suspicious of William’s character and motives and it was interesting to read how it all panned out in the end.

BETH: Did you predict what would happen at any point in this novel?

CHRISSI: I don’t think so. I had some ideas along the way but nothing that was particularly solid. I think it could have gone in any direction really… it was that sort of book!

CHRISSI: Without spoilers. why do you think Nicola finally acknowledges what happened to her at age 20?

BETH: I think Nicola goes through so much inner turmoil as she relives her own personal experiences through that of her mother and grandmother. It reminds her how different life was for women just a generation or two ago and how little power or control they seemed to have over their own destiny. As a result, it makes her think again about how times have changed. She now has the perfect opportunity to break her silence and speak out whilst arriving at the realisation that telling her family the truth is better than hiding terrible secrets.

BETH: Why do you think Betty mentioned the babies to Nicola before she died?

CHRISSI: In my opinion, Betty wanted her family to be able to move on. If she told Nicola then the secrets would be out in the open. I think it somewhat took a weight off Betty’s mind and she could die knowing that she had done the right thing.

CHRISSI: What significance do the fairy statues have throughout the story?

BETH: I love the addition of the fairy statues (and I’m sure you did too, I know you have a fondness for fairies!). However, they do represent something a lot darker and more saddening than you would normally associate them with. I believe they represent childhood, innocence and how these things can be permanently altered through traumatic experiences.

CHRISSI: I would. I haven’t read this author before, but I was pleasantly surprised at how easy her writing was to read.

10 thoughts on “Talking About ‘The Last Thing She Told Me’ with Bibliobeth!”