Welcome to the last Banned Books of 2018! This month we read Flashcards Of My Life by Charise Mericle Harper. 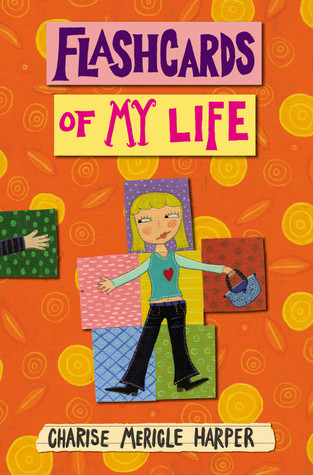 Flashcards Of My Life by Charise Mericle Harper.

In the Top Ten most frequently challenged books in 2008 (source)

BETH: I amuse myself sometimes. For me, it feels like 2006, when this book was first published was relatively recently. It’s hard to believe it was twelve years ago now! I don’t believe our attitudes were much different back in 2006 from what they are now so as always, I don’t agree with any of the reasons why this book was challenged. Once more, they actually make me roll my eyes. Sexually explicit – I mean, come on! This book is written from the perspective of a young, naive adolescent girl talking about everything that teenage girls tend to talk about…friends, boys, kissing and in no way, shape or form was there anything remotely risque about what she was discussing in her journals.

CHRISSI: 2006… I was at university. I worked with children at the time and whilst they were younger than this book is aimed at, they certainly weren’t as naive as some people believe children are. Children and young teens do talk about boys, kissing etc. etc. There is absolutely nothing wrong with anything in this book. It is perfectly natural and it felt really realistic to what a young teen/young adult would write. This book is far from sexually explicit. Come on. Stop underestimating the younger generation!

BETH: Definitely not. Unsuited to age group? Well, what age group is this aimed at? Middle grade to young adult? If that’s the case, no it’s not unsuitable. It’s normal teenage ponderings that are perfectly innocent and natural. In fact, I’d worry if a book like this was challenged/banned because I think teenagers need to read a book like this to make them realise that what they’re going through is perfectly ordinary.

CHRISSI:  The only reason this book would be unsuitable to its age group is if it’s age group was 8 years old or younger. I don’t think it is. I imagine this book is aimed at tweens to young adults. It’s certainly not worth banning- especially 12 years later.

BETH: Personally, I found myself skim reading parts of this book. At this point in my life, I’m certainly not the intended audience and because of this, I didn’t enjoy it as much as I would have hoped. I can obviously sympathise with all the feelings that Emily went through as of course, I went through them myself and I’m sure this book will resonate with thousands of other girls across the world.

CHRISSI: It was one of those ‘meh’ books for me. I know I’m not the intended audience, so it’s not necessarily going to grip me. I do think there is much better material out there. I did really like the flashcard idea though. I thought that was great and probably would’ve enjoyed the book more if it was just the flashcards. The stories in-between fell a little flat for me.

CHRISSI: Yes- I personally didn’t enjoy it but I know those that it’s intended for would get more out of it.

Here are 2018’s books that Beth and I will be reading for our Banned Books feature that has been running since July 2014!

JANUARY: Summer Of My German Soldier–Bette Greene
FEBRUARY: Twilight–Stephenie Meyer
MARCH: Fallen Angels –Walter Dean Myers
APRIL: Saga Volume 3 –Brian K.Vaughan and Fiona Staples
MAY: Blood And Chocolate –Annette Curtis Klause
JUNE: Brave New World–Aldous Huxley
JULY: Julie Of The Wolves –Jean Craighead George
AUGUST: I Am Jazz– Jessica Herthel
SEPTEMBER: Taming The Star Runner– S.E. Hinton
OCTOBER: Beloved –Toni Morrison
NOVEMBER: King & King –Linda de Haan
DECEMBER: Flashcards Of My Life– Charise Mericle Harper
I’m looking forward to seeing if I agree with the reasons for these books being banned. If you want to have a look at the previous books (42 of them!) that Beth and I have read for this feature, check out the page for Banned Books here on my blog!