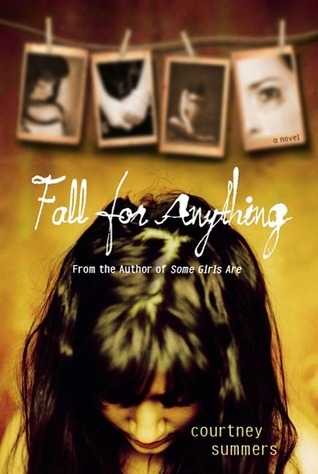 Previously reviewed by the same author:
Cracked Up To Be
Some Girls Are
All The Rage

When Eddie Reeves’s father commits suicide her life is consumed by the nagging question of why? Why when he was a legendary photographer and a brilliant teacher? Why when he seemed to find inspiration in everything he saw? And, most important, why when he had a daughter who loved him more than anyone else in the world? When she meets Culler Evans, a former student of her father’s and a photographer himself, an instant and dangerous attraction begins. Culler seems to know more about her father than she does and could possibly hold the key to the mystery surrounding his death. But Eddie’s vulnerability has weakened her and Culler Evans is getting too close. Her need for the truth keeps her hanging on…but are some questions better left unanswered?

I have recently discovered Courtney Summers and I ADORE her writing. I love that she’s not afraid to write about tough subjects. She does so in such a raw way which I really appreciate. She doesn’t shy away from tough subjects which makes her writing so compelling to read.

Fall For Anything centres around Eddie Reeves, whose father has committed suicide. Immediately you know that the story isn’t going to be all sweetness and light. It’s tough. It’s hard to read about Eddie’s grief, as expected, Courtney doesn’t shy away from writing about struggles after a bereavement, especially one as painful as suicide. It was so tough to read, but so important at the same time. She really portrayed the family left behind, completely broken. Eddie tries to piece some of the information left about her father in order to understand why he killed himself. It really is a rollercoaster of emotion, that the reader gets to experience through Eddie.

I really enjoyed that romance wasn’t a huge element of this story. Eddie needs time to grieve. Whilst trying to piece everything together, Eddie pushes those close to her away as her main goal is to find out why her father felt he had to do what he did.

I don’t want to say too much because otherwise I’ll spoil the reading experience. Courtney Summers is an author that really stands out for me as an author that’s not afraid to write honestly. I can never put one of her books down, no matter how hard it is for me to read. I appreciate that and highly respect it!

Whilst this isn’t my favourite book from Courtney Summers, I still raced through it eager to find out what was going to happen!