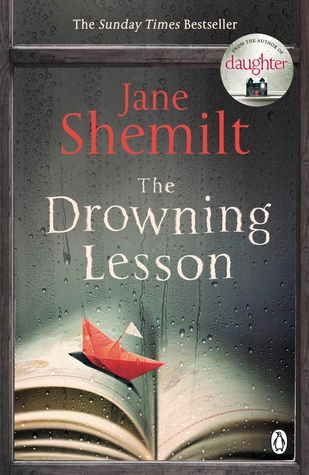 How did I get it?:
NetGalley- with thanks to Penguin UK-Michael Joseph

Emma and Adam are doctors at the top of their fields and so when they are offered the chance to take their three children to Africa for a year for a research placement it seems like the opportunity of a lifetime. It’s going to be an experience they’ll never forget.

But for all the wrong reasons.

When Emma arrives home one night to the sickening sight of an empty cot, their family’s dream adventure turns into their worst nightmare.

Thousands of miles from home and from anyone who can help, they must discover the truth. Is this a random abduction, a tragic accident or something far more sinister?

I really enjoyed Jane Shemilt’s debut novel, Daughter, so when I found out about The Drowning Lesson I knew I had to read it ASAP. For me, The Drowning Lesson didn’t quite live up to the author’s debut, but it was still a decent thriller which didn’t take me long to read at all.

The Drowning Lesson centres around Emma and her husband Adam. Both Emma and Adam are in the medical profession and are highly successful in their fields. They are definitely over achievers…Emma has a little bit of jealousy over Adam’s successes and wants to be as good as him, if not better. Adam gets the opportunity to go to Botswana for research for a year. Emma and the family could go with him but her competitive streak wants her to push her own work over Adam’s. Emma finally goes out to Botswana, but the family return with one less child and the family’s world is thrown upside down.

I really enjoyed how Jane Shemilt used flashbacks to explore the story. I’m not always a fan of flashbacks as sometimes I think it can make the story feel very stilted, however, I really think it worked well with The Drowning Lesson. The opening chapter lets the reader know about the missing child and throughout the story more information is teased out, slowly building the intrigue.

I don’t think the characters in this story are necessarily likeable. I found Emma in particular to be a rather cold and unlikeable character. It was hard to sympathise with her, even though she was taking the right steps to get her child back. I felt like there wasn’t enough emotion in the book, considering what had happened.

I would also say that the ending felt rather rushed, which is a shame. There are twists and turns which keep you guessing though as you try and work out exactly what has gone on. I do think this book is well worth reading, it just didn’t quite match up to Daughter for me.

A decent thriller worth exploring!

It’s safe to say that I exceeded this challenge this year.

How well do you really know those you love?

Jenny loves her three teenage children and her husband, Ted, a celebrated neurosurgeon. She loves the way that, as a family, they always know each other’s problems and don’t keep secrets from each other.

But when her youngest child, fifteen-year-old Naomi, doesn’t come home after her school play and a nationwide search for her begins, secrets previously kept from Jenny are revealed.

Naomi has vanished, leaving her family broken and her mother desperately searching for answers. But the traces Naomi’s left behind reveal a very different girl to the one Jenny thought she’d raised. And the more she looks the more she learns that everyone she trusted has been keeping secrets.

How well does she really know her sons, her husband? How well did she know Naomi? If Jenny is going to find her, she’ll have to first uncover the truth about the daughter she thought told her everything.

The synopsis of Daughter immediately appealed to me. I don’t know what it is about thriller/mystery stories like this, but something immediately makes me want to read it. Whilst Daughter isn’t my favourite book in this genre, I still thought it was a solid read, well worth looking at if you’re into mysterious adult fiction!

Daughter centres around Jenny and her family, but specifically the mysterious disappearance of Naomi, Jenny’s youngest child. She disappears after a performance at school leaving her family wondering whether she was still alive. As clues are searched for, Jenny realises that she didn’t know her daughter very well at all. Not only that, Jenny doesn’t know her boys or her husband either. As the search for Naomi continues, Jenny unravels a lot of family secrets that she had no idea were lurking.

Daughter jumps around to different times including before and after Naomi’s disappearance. It is always clearly labelled with the amount of days before or after so you know exactly what time period you are reading about. It also jumps a year into the future. I don’t always think this works with books, as it can get a little confusing and can sometimes feel a little disjointed, but this isn’t the case with Daughter. It works.

I have to admit, Daughter is quite a bleak read, but I think you’d expect that given the subject matter. As well as trying to solve the mystery of Naomi’s disappearance it also focuses on the secrets between families. The secrets slowly come out and the family are left to deal with the consequences. This, alongside Naomi’s disappearance really does make the story incredible intense.

Daughter is an enjoyable read, but to me, it didn’t stand out against other books in the genre. It was good, fast-paced and well written but it wasn’t really anything unique.

A likeable, well written thriller that crime/mystery fans will enjoy!

I am currently reading The Earth, My Butt and Other Big Round Things as part of the Banned Books feature that I’m doing with my sister Beth and my friend Luna!

I recently finished Daughter by Jane Shemilt. I enjoyed it, but it didn’t really blow me away. My review for this book is coming up later today!

I’m reading Since You’ve Been Gone by Morgan Matson as part of my Compare feature with Luna. The review will be coming up towards the end of the month. I’m really looking forward to reading this book after adoring Second Chance Summer.

So what are you reading this week? Feel free to leave your links in the comments section below or answer the questions! Happy Reading!