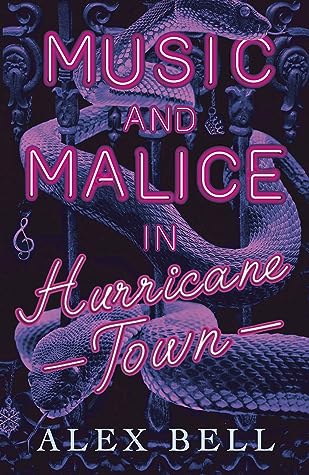 Jude Lomax scrapes a living playing the trumpet on the neon streets of Baton Noir. Then she is invited to play at the funeral of the infamous cajou queen, Ivory Monette. Passing through the cemetery gates, Jude finds herself possessed by the murdered queen’s spirit. And Ivory won’t rest until she’s found the person responsible for her death.

If Jude wants to be rid of the vengeful spirit, she must take a journey deep into the dangerous underbelly of the city, from the swampy depths of the Black Bayou to the velvet opulence of the vampires’ secret jazz clubs. But as Jude untangles Ivory’s web of secrets, she is confronted with a few dark truths from her own past…

I have really enjoyed Alex Bell’s step into YA horror/fantasy in the past so I was super excited to read her newest book Music and Malice In Hurricane Town. After the first few chapters, I was gripped.

The story centres around Jude who is a young woman that works hard to pay the rent. Jude looks after her father who has become very dependent on her after a tragic accident. Jude plays in the Done and Dusted band and has accepted a job in Moonfleet Manor. The Phantom owns Moonfleet Manor and he’s just as creepy as the estate itself. Jude is desperate to save her dad from the past. Whilst playing at the cajou queen’s funeral, she is possessed by the spirit of the murdered queen. Ivory is determined to find out who murdered her and she doesn’t mind using Jude’s body until she finds out exactly who killed her. Everywhere and every single thing that Jude does, something dangerous occurs. Just how far will Jude go to help her father?

The plot itself is exciting. There’s so much going on but it never feels like an info dump at any point. It definitely has that eerie vibe and I adored that!

A fantastic YA horror/fantasy read. Well worth checking out!