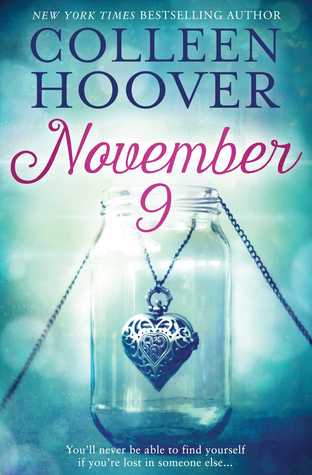 How did I get it?:
A Christmas Gift from a blogging Secret Santa!

This is a love story between a guy (me) and a girl (Fallon).
I think.
Can it even be considered a love story if it doesn’t end with love?
Mysteries end when the mystery is solved.
Biographies end when the life story has been told.
Love stories should end with love, right?
Maybe I’m wrong, then. Maybe this isn’t a love story. If you ask me…I’d say this might even be considered a tragedy.
Whatever it is—however it ends—I promised I would tell it. So without further ado.

Once upon a time…I met a girl.
THE girl.

I really enjoy Colleen Hoover’s books. I totally get that she’s not for everyone and some people are beginning to find her books a little samey. However, for me, I have enjoyed every one of her books so far even if I feel different about them all. I enjoy the characters that Colleen Hoover creates. Things that bother me in other books, don’t seem to bother me in a Colleen Hoover book. November 9 isn’t flawless. There were quite a few things that bugged me, which is why I didn’t give this book 4 stars. If you’re a fan of Colleen’s writing, then I’d definitely check this book out.

November 9 is about Ben and Fallon. Fallon had started working as an actress and had a promising future ahead of her, until an accident changed everything. Fallon was left with some scarring which she became completely self conscious over and as a result damaged her acting career. Fallon’s relationship with her Dad had changed since the accident and during a lunch together, it became clear just how difficult the relationship had become. Ben was in the same restaurant as Fallon and he stepped in to save the day. Ben and Fallon had an instant attraction to one another and after Ben stepped in, they made plans to see each other, once a year, on November 9. This was also the anniversary of the terrible accident.

November 9 is well written. You find yourself wondering what’s going to happen on the next November 9. I was rooting for Ben and Fallon and wished they could spend more time with one another. I have to say, it is a very angst ridden book. There’s so many emotional twists and turns and some which don’t feel overly believable. Ben does some terrible things within the book and it didn’t sit very comfortably with me.

That’s not to say that I didn’t enjoy the story. I really did. It didn’t take me long to read and I was very intrigued by the concept. I wanted to see what secrets were hiding. I was waiting for the plot twist and I certainly wasn’t disappointed when it came.

I think if you enjoy Colleen Hoover’s previous books or if you’re a fan of romance then this could certainly be a read for you!

Intriguing concept although a few things niggled at me!