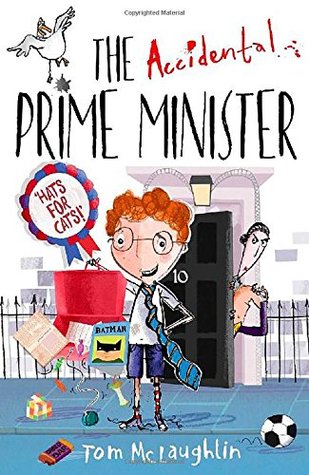 How did I get it?:
Unsolicited copy from Oxford University Press for review consideration!

When Joe tells a local news reporter exactly what he would do if he were leader of the country, the video goes viral and Joe’s speech becomes famous all over the world! Before long, people are calling for the current leader to resign and give someone else a go …and that’s how an ordinary boy like Joe ended up with the most extraordinary job. Now the fun can really start …Hats for cats! Pet pigs for all! Banana shaped buses! Swimming pools on trains! A hilarious story of one boy’s meteoric rise to power!

I was sent this book by Oxford University Press several months back and I thought I’d save it for May, to read in the run up to the General Election. It seemed rather fitting to publish this post today when many of us will be voting for the next Prime Minister. I don’t know how it’ll go, but I know for sure that it won’t be a twelve year old boy that’s running the UK! Can you imagine what it would be like if it was?!

The Accidental Prime Minister tells the story of Joe, who unexpectedly goes viral after telling the Prime Minister exactly what he thinks of him and how the country should be run. Joe’s speech is videoed and is everywhere. Soon, the people are calling for Joe to be Prime Minister. The current leader resigns and Joe takes over. That’s when the fun really begins!

I think this book is a good introduction to politics and big decisions for children ages 7 years +. It was a really cute, easy to read, funny book which I can imagine myself reading with children at school. There’s a great deal of humour involved which will immediately appeal to children. I also love how the author has also illustrated the story as well as written it. I can certainly see this book being a hit in the classroom and beyond!

A fun, light hearted read which gets a little silly at times, but it will definitely appeal to children!