I signed up for the experienced challenge which meant that I aimed to finish between 3-6 series.

I did add on Bad Girls Don’t Die because I couldn’t get on with my original pick which was The Wolves of Mercy Falls by Maggie Stiefvater. I was really pleased to finish these series and I’ll definitely be looking at a similar challenge for 2017.

This was hosted by Kirsty at Overflowing Library. I read 66 British books in 2016! I will be continuing this challenge into 2017. It’s one of my favourites!

My sister Beth and I read 12 more Banned Books this year. On every last Monday of a month we read a banned/challenged book and we talk about the reasons why!

It’s been a great year of reading challenges which I feel really vary my reading choices. I’m hoping for more of the same in 2017.

Welcome to this month’s Banned Books feature where this month Beth and I read Bless Me, Ultima by Rudolfo Anaya. 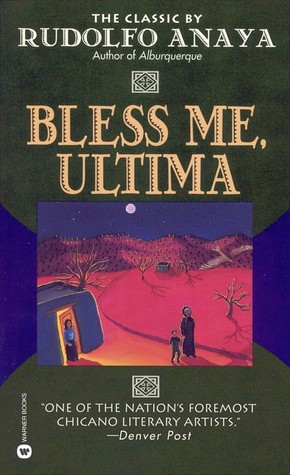 Antonio Marez is six years old when Ultima comes to stay with his family in New Mexico. She is a curandera, one who cures with herbs and magic. Under her wise wing, Tony will probe the family ties that bind and rend him, and he will discover himself in the magical secrets of the pagan past-a mythic legacy as palpable as the Catholicism of Latin America. And at each life turn there is Ultima, who delivered Tony into the world…and will nurture the birth of his soul.

In the Top Ten most frequently challenged books in 2013 (source)

BETH:  Bless Me, Ultima is one of our older releases on our banned books list this year and, as a result, I can see why certain things in the book may be challenged due to the change in attitudes compared to more modern times (this is not to say I necessarily agree with the challenges of course!). This book has a lot of references to witchcraft – the “black witch” kind that involves the devil not the nice, nature-loving “white witch” kind and I know there are a lot of people out there who do not want their children exposed to that kind of thing. If we compare it to nowadays, this is the same kind of people that don’t want books like Roald Dahl’s “The Witches,” or J.K. Rowling’s “Harry Potter,” available in schools. I don’t agree with their viewpoints as I think curiosity in children should be encouraged but I understand their right to a difference in opinion.

BETH: Nowadays, I think it’s even more important for children to have access to a wide variety of information about different practices and opinions to their own or their parents, even if it is difficult or somewhat controversial – within reason, of course depending on the age of the child. In the time of the internet where EVERYTHING is available, I think if children are curious enough, banning or refusing access to the book isn’t going to help. If they are determined enough, they are going to get their hands on it anyway and sometimes I believe refusing something might actually encourage children to be more rebellious and seek it out more!

CHRISSI:  I honestly don’t think that this book would be as problematic now as it was when it was first released. This is mainly due to the amount of ‘popular’ wizardry/witchy books out there right now. It seems much more acceptable subject to be featured in literature. I know some parents still have problems with witchcraft books (I wasn’t allowed to read The Witches by Roald Dahl to my class of 6-7 year olds last year, as one child’s parent was a devout Christian) but I don’t think it’s nearly as bad as it used to be. I think putting a banned label on something can make children more curious to seek it out themselves.

BETH: Unfortunately, I really didn’t get on with this book. Don’t get me wrong, I didn’t have any problem with the content and I normally love a good bit of magical realism but something just didn’t sit right with me. I couldn’t get into the plot, the characters or the writing flow and it all seemed a bit too airy-fairy. Antonio and Ultima were decent enough characters and the things that Antonio has to witness and go through are much harder than your general coming of age story but I just found myself a bit bored and disappointed throughout, despite the difference in culture which I would normally love.

CHRISSI: I really didn’t like this book. Despite it having a lot going on from witchcraft, murder and revenge, I found myself to be incredibly bored throughout and I ended up skim-reading quite a bit which is a shame. This book just did not grab me like I wanted it to. I also don’t think the story is very relevant to today’s readers. Hmm. A real disappointment.

BETH: Probably not.
CHRISSI: It’s not for me!

Beth and I have really enjoyed reading Banned Books and with the amount of Banned Books out there, there’s certainly scope for us to continue reading them. We get the lists from the American Library Association. For the books read so far in this challenge check HERE. Here are the 2016 reading choices: