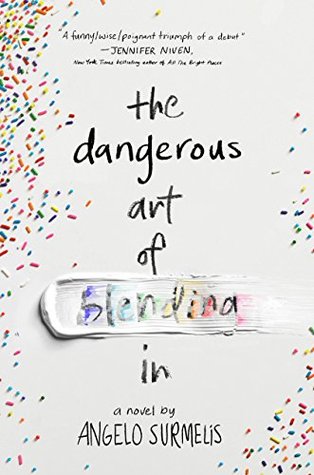 Seventeen-year-old Evan Panos doesn’t know where he fits in. His strict Greek mother refuses to see him as anything but a disappointment. His quiet, workaholic father is a staunch believer in avoiding any kind of conflict. And his best friend Henry has somehow become distractingly attractive over the summer.

Tired, isolated, scared-Evan’s only escape is drawing in an abandoned church that feels as lonely as he is. And, yes, he kissed one guy over the summer. But it’s his best friend Henry who’s now proving to be irresistible. It’s Henry who suddenly seems interested in being more than friends. And it’s Henry who makes him believe that he’s more than his mother’s harsh words and terrifying abuse. But as things with Henry heat up, and his mother’s abuse escalates, Evan has to decide how to find his voice in a world where he has survived so long by avoiding attention at all costs.

I have been meaning to read this book for about a year now and I’m finally pleased to say that I finished it. I did have high hopes for this book and whilst it wasn’t quite a 5 star read for me, I still thought it was bloomin’ marvellous and a very accomplished debut. I will warn you that there’s some horrifying abuse in this story so beware if that content may upset you.

It centres around 17 year old Evan who is trying to find out where he fits in life. His Greek mother believes he’s a disappointment and regularly beats him. She constantly puts him down and the abuse he goes through is absolutely horrific. Evan’s mum is incredibly religious and uses religion as an excuse to beat her son who she believes God thinks is wicked and sinful. The reason why she feels this way is that she believes that her son could be gay. Evan feels terrible about himself and tries to be the ‘normal’ Greek son, even if it means hiding his true self. Evan’s father pretends the abuse isn’t happening as do others in Evan’s life and it’s absolutely heart-breaking.

Evan is an amazing character. I grew to love him really quickly and I hated to read about the abuse he suffered. His self-worth was obviously so low and I wanted to reach into the book and tell him his worth. I liked how the book showed the effects of his mother’s abuse on Evan. He clearly wasn’t used to nice and when it happened to him, he rejected it. My heart broke once more.

Evan and Henry’s relationship is very cute. It develops from a friendship and that’s my favourite sort. I also appreciated that Henry wasn’t a character to make everything better. Evan had to help himself and I like that. No-one wants to be reliant on another for happiness.

I thought that this book was such a good debut and I look forward to reading more from Angelo Surmelis.

This book is heavy-going and intense but so beautiful!