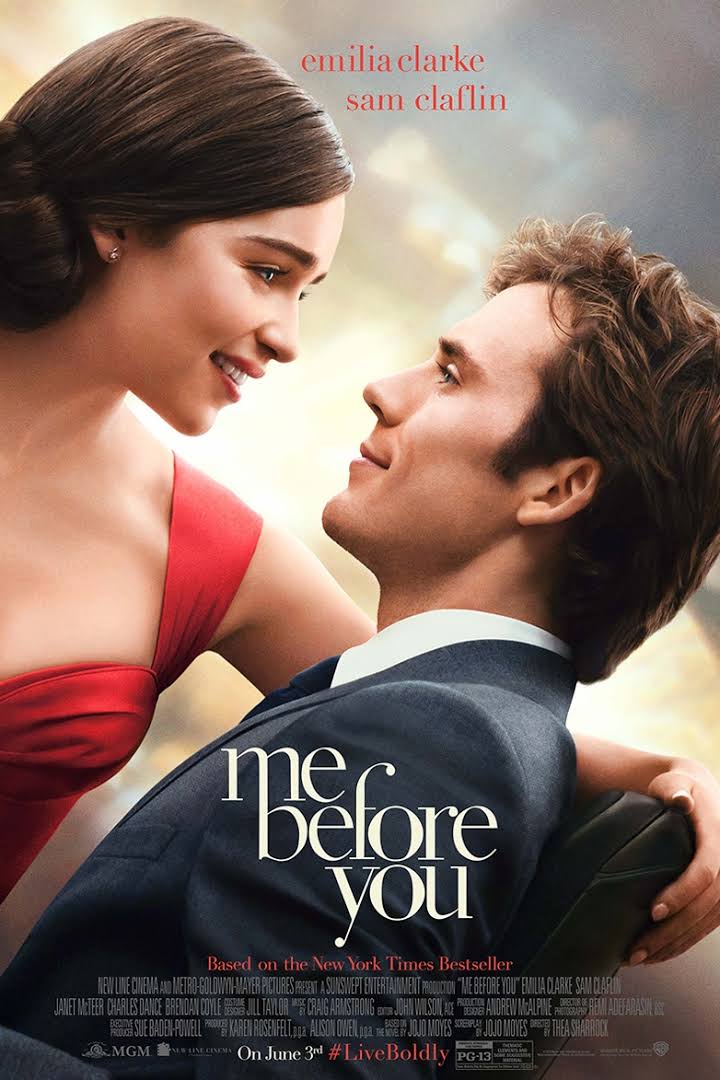 I was really nervous about watching this film which is adapted from one of my favourite books of all time, Me Before You. I always get worried when a favourite of mine is made into a film. I worry it’ll be ruined for me. So that’s why it’s taken me so long to watch it. Did I enjoy it? Yes. I think it was a generally faithful adaptation.

If you don’t know the story of Me Before You it centres around a character called Louisa Clark ‘Lou’. She comes from a rowdy British family. Lou needs a job and takes one as a carer for quadriplegic Will Traynor. Will was a party boy until he was paralysed in a motorcycle accident two years prior. Will is sarcastic and quite standoffish to Lou at the start, but as their relationship grows, Will softens and opens up more to Lou. They share some great times together. Lou is a distraction from Will wanting to end his life at a clinic in Switzerland. When Lou finds out she is determined to show him that life is worth living. But can she do enough to change his mind?

I thought Emilia Clarke was so well cast as Lou. I remember really liking her character in the book. I loved how caring she was and how determined she was to show Will a good time despite the challenges that came with his disability. I wasn’t as keen on Will, as he wasn’t how I pictured him, but this didn’t affect my enjoyment of the film.

I have read a lot about how some disability groups weren’t happy with this film. They didn’t like the ending of the film and didn’t think it was an accurate representation of those living with a disability. I can totally respect that, but I do believe that it was right that they showed that Will had a choice. He is one disabled man and doesn’t represent a whole community.  I also think it’s important that there are more films with disabled characters. Why on earth shouldn’t there be?

Personally, the film didn’t hit me as hard as the book did. But it was still incredibly moving and it’s one I’m glad that I gave a chance. It may not include every single thing in the book, however, it is quite faithful and that I appreciate!