This week I jumped back into my Scottish Folk and Fairy Tales book. This time I read a story very like the tale of Rumpelstiltskin with a wonderfully Scottish twist.

It’s centred in Galloway in a fictitious village that was called Kittlerumpit. It was based in a time where it wasn’t strange to see Wee Folk or Other People (fairies in Scotland!) In a small house there lived a man and a woman. The man did as little as possible and the woman did everything around the house. She even looked after the fat pig that they kept at the back of their house. The woman was not as happy as the man though. She was desperate for a baby. Years later, she gave birth to a little boy and her man wasn’t impressed- he had to do a lot around the house as she was dedicated to raising the baby. He wasn’t happy with the smell, the noise and the mess of the little one.

The next time there was a market day, the man disappeared. He knew he wouldn’t go back to the house where he had to work for himself and cook his own dinner. He’d get away from the baby too. When the woman realised her husband wasn’t coming back, she was sad but knew she had to get on with her life as best as she could. The baby grew more and more. She looked after the garden well and tended to the pig.

The lady Wee Folk told the woman that if she could guess her real name then she wouldn’t take the baby away. The woman tried to find out from her neighbours what the name of the lady Wee Folk was. No one knew. The woman eventually overheard someone singing. It was the green lady. She was singing her name Whuppity Stourie.

The man returned home gain as he had missed a warm meal, his wife and his baby very much. He promised to do more to help her!

Next Fairy/Folk Tale- The Shepherd’s Dog

This week’s fairy tale is another Scottish one! This time it’s a forbidden love fairy tale.

It centres around Jean of Mortonhall and William of Aikenwood. It is based around a time when Scotland and England were bitter rivals. Jean’s father, the Earl of Mortonhall had eight pretty daughters. He warned them that neither of them were to even smile at a Scotsman. They would never be allowed to visit Scotland and if a Scotsman entered through his gate they would be killed.

Jean was the youngest and prettiest of her siblings. A while back she had got lost whilst riding and wandered over the border into Scotland. She had met a handsome man named William. They fell in love, but of course, their love was forbidden. William was a brilliant hunter who often went out with his hounds and horses. He had a goshawk too. The goshawk could tell that William was pining for Jean. They decided that the goshawk would send a message of love to Jean since William couldn’t do it. Jean got the message and felt desperate to meet William. She sent back a message to tell him to listen out for bells.

Jean convinced her father, that when she died, her body would be carried to rest in Scotland. Jean then spoke to her sisters, who promised that if she should die then a shroud would be made of the finest cloth and each one of the sisters would fasten a silver bell onto it.

Jean then took a very strong sleeping potion and returned to her bedroom. The potion was so potent that he family were convinced she had died. They respected her wishes and covered her in the finest cloth and silver bells, then carried her over the borders to Scotland.

William heard the bells and after the funeral party had left, he took Jean’s hands in his. The colour came back to Jean’s face and she awoke, happy to be reunited with the man she loved!

This Scottish tale is all about a young boy named Kyle. He was from quite a poor family with the only food being available to him and his family being what they grew on a strip of land between their cottage and the shores of the loch. Kyle overheard his mother speaking to his father about spring sowing. Kyle’s father said he was too old to drag the plough and Kyle too young. His mother worried, wondering what to do. Kyle’s father wanted to use a horse to pull the plough, but his wife disagreed. She said it wasn’t a horse outside, but a water kelpie. She begged him not to try to mount the water kelpie as legend had it that no man could tame the water kelpie. Unfortunately, Kyle’s father was insistent and ended up being dragged under by the water kelpie.

Kyle went to the loch to try and get some fish for dinner. He came across an old woman who explained she was freezing at night because her bones ached. Being a good boy, he brought her his father’s plaid to give to her. The woman said she didn’t take anything without giving anything and gave Kyle her shawl telling him it could be better to sit upon a plaidie than wrap it around you. That day, Kyle caught a fish.

The next day the woman returned again near the loch. She told Kyle how hungry she was and he kindly gave her bread that was meant to be for his breakfast. In return, the woman gave Kyle a lump of salt in a pouch. She said salt could be used to kill rather than to cure. That day, Kyle caught 2 fish.

On the third day, Kyle wondered what on earth the woman would want next. The woman wanted a stout rope to pull her bucket from the well. He have her the plough rope as he could not push the plough. The woman gave Kyle a bridle for a horse and told him iron is not only used to make a pot.  That day, Kyle caught 3 fish.

Kyle’s mother told him to take notice of what the old woman had told him. Later in the week, the water kelpie showed itself again. Kyle was determined to beat the water kelpie, but his mother warned him of the legend. Kyle was eager to try. When his mother fell asleep, he put the worn shawl around his shoulders, took the horse bridle and climbed out of the window towards the loch.

He remembered the woman’s words. He took the shawl and placed it over the creature’s back. Then he grabbed its mane and mounted the kelpie. The kelpie grew bigger and bigger. His mother had awoken by then and begged him to jump off. He said he would not until the kelpie ploughed the field. The kelpie snorted and reiterated the legend that no man could ride a water kelpie and live. Kyle remembered the salt and used it against the water kelpie. The salt made the water kelpie enraged. Kyle used the iron part of the horse bridle to slip into the kelpie’s mouth. This immediately tamed the kelpie and it became obedient.

This shows that the legend was true- no man could master the water kelpie, but a boy could!

Next Fairy Tale- The Goshawk and The Brave Lady

I’m taking it back to my heritage today with a Scottish Folk and Fairy Tale. It is incredibly like The Gingerbread Man, but I think it’s got a much nicer ending. Selkirk, a town in the borders of Scotland, is famous for its bannocks which are more like fruitcakes than oatmeal bannocks that are more traditional. 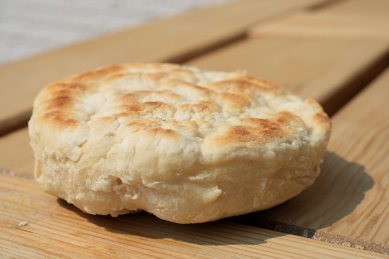 You can see a bannock here.

If you know the story of The Gingerbread Man then you know this story. However, as I mentioned, the ending is better in my opinion! The bannock is made and then runs away from many people that want to eat it. All of the people that the wee (little) bannock ran away from, really had no need to eat a bannock. It was just greed. However, the bannock comes across two poor, hungry children. He allows himself to be eaten because they do need him. How sweet is that!

Next Fairy Tale- The Water Kelpie